Kate and Prince Charles, along with their spouses, joined Queen Elizabeth in welcoming world leaders to the G-7 summit

Kate Middleton appears to have an affectionate (yet relatable!) nickname for her father-in-law, Prince Charles, who recently became a grandfather for the fifth time.

Kate and Prince Charles along with their spouses joined Queen Elizabeth on Friday in welcoming world leaders to the G-7 summit. In a video from their arrival, Prince Charles turns around to chat with Kate and Prince William. Kate appears to greet him with a warm smile and the words, "Hello, Grandpa!" rather than his more formal title.

Kate, 39, may also have called Charles "Papa," the name his sons Prince William and Prince Harry use for him.

Meanwhile, the Queen was all smiles as she said hello to Prime Minister Boris Johnson and his new wife, Carrie.

Prince Charles, 72, has provided some personal glimpses into his role as a grandfather. In family portraits released in honor of his 70th birthday, the Prince of Wales sits his grandson Prince George on his knee while a playful Prince Louis reaches for his granddad's face.

In another snap from the photo shoot, Prince Charles sweetly holds the hand of Louis, who sits in the arms of Kate.

And in honor of Prince Louis's second birthday last year, Prince Charles shared an adorable black-and-white shot of his grandson giving him a big hug.

Prince Charles just became a grandfather for the fifth time with the arrival of Prince Harry and Meghan Markle's daughter Lilibet "Lili" Diana on June 4.

During a speech he gave last week at a carmakers' factory in Cowley, Charles addressed Lili's birth by calling it "such happy news."

As he spoke about innovation and sustainability at BMW's Mini factory, he said, "The development of technology like electric vehicles, or green hydrogen for that matter for heavy transport, is vital for maintaining the health of our world for future generations, something I am only too aware of today, having recently become a grandfather for the fifth time."

"Such happy news really does remind one of the necessity of continued innovation in this area — especially around sustainable battery technology — in view of the legacy we bequeath to our grandchildren," he continued.

Soon after the arrival of Lilbet, who was named for Charles's mother Queen Elizabeth, was announced, the prince and other members of the royal family welcomed the news in a statement, saying they were "delighted with the news of the birth of a daughter for The Duke and Duchess of Sussex." 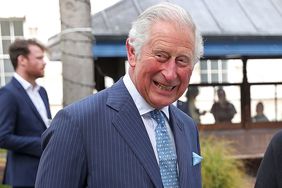