Kate Middleton Just Stepped Out in Her 2017 BAFTA Gown — and She Made One Major Alteration to It!

Kate, who is a patron of the National Portrait Gallery, wore her black floral Alexander McQueen tiered gown from the 2017 BAFTAs — only she had capped sleeves added to the off-the-shoulder dress this time around

Kate Middleton is going from mom mode to full-on glam!

After spending the morning with parents and their young kids at Henry Fawcett Children’s Centre, the royal mom headed out for her second (very different!) outing of the day on Tuesday. She swapped her purple blouse by Gucci featuring a bow neck and wide-leg pants from Jigsaw for a look fit for a future queen for the 2019 Portrait Gala held at the National Portrait Gallery in London.

Kate, who is a patron of the National Portrait Gallery, wore her black floral Alexander McQueen tiered gown from the 2017 BAFTAs — only she had capped sleeves added to the off-the-shoulder dress this time around.

She also changed up her red carpet look from two years ago by styling her hair down in her signature blowout.

The mom of three, 37, previously attended the gala in 2014 and 2017. This year, the Portrait Gala will support Inspiring People: Transforming our National Portrait Gallery, a project for the complete renewal of the Gallery that will see a significant refurbishment of the building.

Inspiring People will also include nationwide outreach, including a school program for teaching history and art – subjects Kate, who studied art history at the University of St. Andrews, where she met and fell in love with Prince William – holds personal interest in.

Also on the night’s guest list were Victoria and David Beckham, Princess Beatrice and Kate Moss.

In addition to being a patron of the Gallery, Kate is a self-described “enthusiastic amateur photographer” – and her favorite subject seems to be her three children: Prince George, 5, Princess Charlotte, 3, and Prince Louis, 10 months.

She’s gotten behind the camera on several occasions, including Prince George’s first day of nursery school and the first official portraits of Prince Louis – including one where he’s being gently kissed on the forehead by big sister Princess Charlotte. 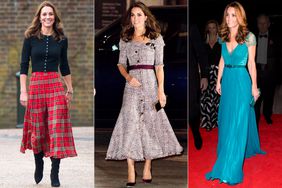 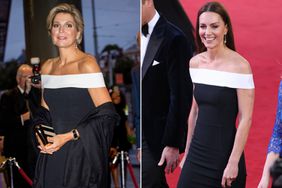