At the end of the match, Kate Middleton presented the trophy to Novak Djokovic on Centre Court

On Sunday, the royal mom of three returned to the tennis tournament for the third time this year, this time with husband Prince William to watch the Gentlemen’s Singles Final as Roger Federer took on Novak Djokovic.

Kate, who wore a light blue dress by Emilia Wickstead, and William watched the match from the Royal Box with Wimbledon chairman Philip Brook and his wife, as well as many other royals.

Ahead of the match, the royal couple met with several senior figures from the All England Lawn Tennis Club, which Kate is a patron of.

During the intense final, which became the longest Wimbledon singles match in history, Kate was spotted reacting to many moments throughout the match, from excitement, shock, joy and fear.

Djokovic and Federer alternated victories through the first four sets in an impressive and historic set, as for the first time ever, the Men’s singles final ended with a 12-12 fifth set tiebreak.

In the end, Djokovic triumphed, winning 7 points to 3.

Kate Middleton Returns to Wimbledon (for a Third Time!) for a Daytime Date with Prince William

At the end of the match, Kate presented the trophy to Djokovic on Centre Court, her first time doing so.

Ahead of the final on Wimbledon Morning Coffee, a show released on the famed tennis tournament’s Twitter page to recap the previous day’s events, the hosts chatted about Middleton‘s outing to watch a few matches.

The royal mom of three sat with British tennis player Katie Boulter and retired British star athlete Anne Keothavong, who told the host they talked about Prince George’s interest in the sport.

Kate reportedly shared that George’s favorite player is Federer — and the 5-year-old has even played tennis with the sports star. 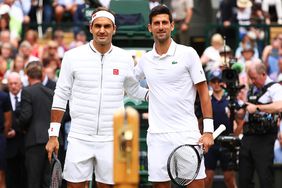