"Sadly, the Queen is not a foodie," one of her former personal chefs has said

It appears pizza is not on the menu when Kate Middleton and Queen Elizabeth get together.

The royal mom of three, who celebrated her 37th birthday last week, was peppered with questions from children during her visit to the King Henry’s Walk Garden in the London borough of Islington on Tuesday. As they made pizzas that would be cooked in an outdoor oven and talked about how fun it is to learn outside, one little girl wasn’t afraid to ask the big questions.

“Has the Queen ever had pizza?” 8-year-old Nadirah inquired, but Kate was stumped.

“You know, that’s such a good question. I don’t know,” the royal responded. “I don’t know. Maybe next time I see her, shall I ask?”

Darren McGrady, who previously served as a personal chef to the 92-year-old monarch, told The Telegraph that she sticks to a strict diet and isn’t one to experiment with different flavors.

“Sadly, the Queen is not a foodie,” he said. “She eats to live, unlike Prince Philip who loves to eat and would stand and talk food all day.”

He added, “No starch is the rule. No potatoes, rice or pasta for dinner. Just usually something like grilled sole with vegetables and salad.”

The Queen is also said to hate garlic, a fact that Camilla, Duchess of Cornwall recently revealed. During an appearance on MasterChef Australia, she said garlic is a “no-no” — especially at royal events and state banquets where there’s lots of chatting.

On Monday’s visit, Kate met with volunteers to discuss the benefits of the urban green space. She toured the allotment plots to see the impact that can be achieved in small gardens. The royal also took part in a winter planting workshop, bird box building and pizza making in the garden’s kitchen area.

“George and Charlotte would love to be learning outside the classroom,” Kate said of her two eldest children. “It’s still fun inside, but it’s much better outside,” to the agreement of the youngsters.

She also admitted that her children would be jealous to find out that she spent the day making pizzas while they were in school. 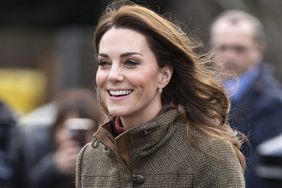