Kate Middleton and Prince William are set to visit the areas in Australia that have been ravaged by the recent bushfires.

The couple is expected to be invited by Prime Minister Scott Morrison, Australia media reported Tuesday, following preliminary discussions with the palace. The Duke and Duchess of Cambridge will visit the states of New South Wales and Victoria, the Sydney Morning Herald reported. Other areas might be added.

William and Kate’s office at Kensington Palace didn’t have a comment — as is protocol until a tour or visit is confirmed and plans are made.

Last month, William and Kate joined other members of the royal family, including Prince Harry and Meghan Markle, in expressing their sadness that the fires “are destroying homes, livelihoods and wildlife across much of Australia.”

Six years ago, the couple visited an area that had been hit by fires when they toured the country (with son Prince George) in April 2014. There is no news yet on whether the couple would take any — or all three — of their children.

William and Kate are said to have made their availability for a possible visit known to their office and the governments of both the U.K. and Australia. And, while sympathetic to the emergency work and rescues under way in Australia, the royals would not want to go there too early and divert energy, resources and attention away from the urgent missions to save people, livestock, wildlife and the countryside.

William has made tackling climate change and environmental campaigning a central part of his public life and has launched the Earthshot prize, a prestigious new worldwide honor to reward innovative efforts being taken to confront the climate emergency. 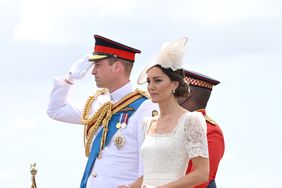