Some have inferred his stylish update "is his wife's influence," a royal source tells PEOPLE

A royal source tells PEOPLE, “He has seemed to have become sharper since he got married, such as wearing a handkerchief in his top pocket. Some have inferred that it is his wife’s influence.”

Indeed, since he and Kate married 18 months ago, William has invested in new suits, says the source, with some up-and-coming Savile Row tailors replacing some of the more dated styles he’d favored before.

The source says that the fit on his Richard James suit, for example, “is much more modern than the suits he had when he was younger.”

Early in October, William wore a suit with neat, trim lapels by Spencer Hart – Diddy is a recent fan – to meet the England soccer team, while the following day, at a funeral for his ex-nanny Olga Powell, the prince wore an outfit by Richard James, who has dressed Tom Cruise, Usher and Daniel Craig.

Kate Is Learning to Ride Horses

That evening, when he reunited with Kate, after her charity visits in northeast England, William was back in another Spencer Hart creation: a blue jacket with his casual khakis and loafers.

Of late, the dapper prince has also been seen in trendy suede $160 loafers from Fin’s, favoring the George style.

The more traditional royal favorites are not being left out, though. William has some new linen suits from Gieves and Hawkes, including one he wore on the recent tour of Asia.

Leading British fashion commentator Hilary Alexander says, “I think it is Kate’s influence. Since the wedding she has obviously had some influence on his wardrobe – guiding him to slightly more modern, contemporary look, rather than perhaps relying on what his father wears.”

But it isn’t all thanks to Kate. Palace sources say that William, like his brother Harry, take a keen interest in their clothes, as evidenced by Harry’s snazzy blue desert boots he proudly donned in the Caribbean in March, and mirror their father in some aspects.

Their spokesman tells PEOPLE, “They recognize the importance of setting an example in their working life by wearing clothing that is both British and smart. The timelessness of that has not lost their appeal to them and they’ve always wanted to keep that alive.”

Kate Dazzles Onlookers as Queen of the Garden?
Related Articles 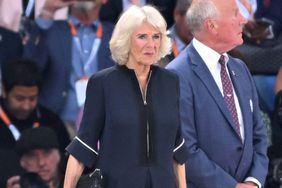