Windsor Castle roads are private – and even Prince Philip, who voluntarily surrendered his driver's license after a car crash, has recently been seen enjoying a cruise on the estate

Someone is practicing for their royal driver’s license a bit early.

James, Viscount Severn – the 11-year-old son of Prince Edward and Sophie, Countess of Wessex – was spotted taking the family’s Land Rover (the royal car of choice) for a spin around the grounds of Windsor Castle. His mother sat beside him in the passenger’s seat before getting out to play fetch with their dogs.

The minimum age to hold a driver’s license in the U.K. is 17, or 16 for some people claiming mobility benefit, according to Gov.UK. You can apply for a provisional driving license when you’re 15 years and 9 months old.

James and his family – including big sister Lady Louise, 15 – appear to be enjoying their time in Windsor after attending Easter church services there at St. George’s Chapel alongside Queen Elizabeth, Kate Middleton, Prince William, Prince Harry and other members of the royal family over the weekend.

The Windsor Castle roads are private – and even Prince Philip, 97, who voluntarily surrendered his driver’s license after a Jan. 17 car crash that saw his Land Rover overturned near the royal family’s Sandringham Estate, has recently been seen enjoying a cruise on the estate.

Royals at the Wheel! See the Queen, Prince Charles and More Royals in the Driver’s Seat

And among her many privileges, the Queen doesn’t have to face the stress of having to pass a pesky driving test.

The monarch is the only person allowed to sit behind the wheel in Britain without a driver’s license — and continues to occasionally drive at age 93.

At age 19, the then-princess learned to master a vehicle at a training center in 1945 while working in the wartime Auxiliary Territorial Service.

But, as part of the “royal prerogative” – discretionary powers or rights that the sovereign alone enjoys — she has never needed to take a driving test because she is excluded from the regulations and laws governing the road, according to the authoritative Royal Encyclopedia. She tends to be seen driving only around her private estates. 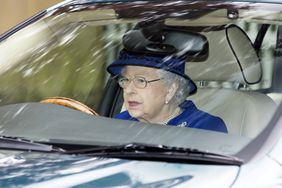 Why the Queen Doesn't Have a License — But Drives Anyway!