Kate Middleton's younger brother has his own love story

James Middleton and Alizee Thevenet made their relationship Instagram official in May 2019, with Kate Middleton's brother posting a selfie (in which they wear matching sweaters!) with the caption "Sail away with me."

James credited his beloved dog, Ella, with introducing him to his bride. According to The Telegraph, James' beloved dog approached Alizee in the South Kensington Club, where they were both having meetings, in the summer of 2018.

The couple confirmed their engagement in October 2019, with Alizee posing with her sapphire engagement ring on display.

The duo even raised a litter of puppies, including one which went to Kate Middleton and her family.

The couple escaped to Italy in September 2020 to celebrate one year of their engagement.

They're always up for an adventure ... and documenting them with dog-photobombed selfies.

The couple bought a home together in August 2021.

"I think buying a house is up there with one of the most stressful experiences in my life," James wrote. "It's been a hectic few months moving in to our new home & we couldn't be happier. We are settling into our life in the country & the dogs ❤️ their new home." 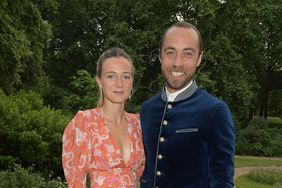