"She has been creating a more independent life for herself and this move is a reflection of that," her spokesman, James Henderson, tells PEOPLE

Sarah Ferguson is leaving London for the ski slopes of Switzerland.

Almost 20 years after her divorce from Prince Andrew, the Duchess of York, 55, is leaving the Windsor mansion she has long shared with her ex-husband for the picturesque ski resort town of Verbier, Switzerland.

According to a report in The Express, Ferguson has settled in a $20 million chalet with a staff of six and a pool.

Her spokesman, James Henderson, confirmed to PEOPLE that the Duchess has left the Royal Lodge at Windsor for Verbier but could not comment on her new home s price, luxury amenities or staffing requirements.

He dismissed the report that the move is the result of Fergie s friendship with internet entrepreneur Manuel Fernandez, 47, with whom she attended the Cannes Film Festival last June.

I think that s unrelated, Henderson told PEOPLE. She s been creating a more independent life for herself, and so this move is a reflection of that.

But Fergie isn t saying goodbye to Britain entirely and remains close with her two daughters with Andrew: U.K.-based Princess Eugenie, 25, and Princess Beatrice, 26, who is set to start a new role at an equity firm in Manhattan. Although Fergie’s new home “will be her base, her focus, says Henderson, “she travels a lot for business engagements and she has a daughter working in London and another in New York.”

And she still has a flat in London, adds Henderson, and a room at the Royal Lodge at Windsor for family occasions.

As for her relationship with Andrew, 55, which has famously been a close one, Henderson says the move has nothing to do with any conflict or drifting apart between the friendly exes. “They continue to have a very strong relationship. He helped her out while she needed somewhere to live.”

The new chalet is a private (non-royal) purchase that she “co-owns” with Prince Andrew, says Henderson.

The Duchess’s current projects include her latest children’s book, Fergie’s Farm, producing an upcoming film on Monaco’s Prince Albert and the U.S. launch of the Fusion Xcelerator food emulsifier, for which she is a spokeswoman. She also plans to launch her own range of tea and has teamed with Andrew to help benefit Key to Freedom, a foundation that benefits vulnerable women around the globe. 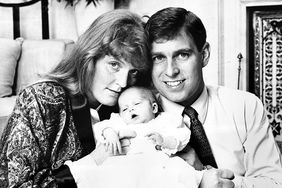