Even at their 2017 engagement interview, Prince Harry says he tried to "warn" Meghan Markle of the drawbacks of being part of the royal family. See what the couple have said about life supporting the monarchy.

In a 2012 interview with CBS, Harry recalled how the sometimes mundane duties that come with being part of the royal family impacted his childhood.

"Dinner conversations was the worst bit about being a child and listening — listening to the boring people around me. Well, you can imagine the kind of dinner parties I had to go to at a young age … Pretty dull,” he said.

Harry added that there were moments that he and Prince William longed for an ordinary life.

"There's a lot of times that both myself and my brother wish obviously that we were just, you know, completely normal," he said. "But, you know, we've been born into this position. And then therefore, we'll do what we need to do to make a difference to the people and to kids that need it, you know?"

Prince Harry told Newsweek in 2017 that he was in a rush to "to make something of my life. I feel there is just a smallish window when people are interested in me before [William's children] take over, and I've got to make the most of it."

Prince Harry told Newsweek in 2017 that he and brother Prince William "are involved in modernizing the British monarchy. We are not doing this for ourselves but for the greater good of the people…. Is there any one of the royal family who wants to be king or queen? I don't think so, but we will carry out our duties at the right time."

Though Prince Harry told Newsweek that he aches to be "something other than Prince Harry," it's a "tricky balancing act" to also have an ordinary life.

"We don't want to dilute the magic," he said. "The British public and the whole world need institutions like it."

"The monarchy is a force for good," Prince Harry told Newsweek in 2017, "and we want to carry on the positive atmosphere that the queen has achieved for over 60 years, but we won't be trying to fill her boots."

In their Nov. 2017 engagement interview, Prince Harry said he thought of Meghan as "an added member of the family."

"It’s another team player as part of the bigger team and you know for all of us, what we want to do is be able to carry out the right engagements, carry out our work and try and encourage others in the younger generation to be able to see the world in the correct sense rather than perhaps being just having a distorted view," he said.

Both Meghan and Harry admitted in their engagement interview that it was difficult to prepare the former Suits star for royal life.

"I think I can very safely say as naive as it sounds now, having gone through this learning curve in the past year and a half I did not have any understanding of just what it would be like," said Meghan. "I don't think either of us did that we both said that even though we knew that it would be.

Prince Harry added, "I had tried to warn you as much as possible," but that warning wasn’t enough. "I think you can have as many conversations as you want, trying to prepare as much as possible but we were totally unprepared for what happened after that."

In the 2019 ITV documentary Harry & Meghan: An African Journey, the Duchess of Sussex opened up about the onslaught of media attention that comes with life as a royal.

"I have said for a long time to H, that’s what I call [Harry], 'It's not enough to just survive something. That’s not the point of life. You have to thrive. You have got to feel happy,' " she said. "I really tried to adopt this British sensibility of a 'stiff upper lip.' I really tried, but I think that what that does internally is probably really damaging."

Prince Harry also spoke out on the impact of the press.

"Look, part of this job and part of any job, like everybody, means putting on a brave face and turning a cheek to a lot of the stuff. But again, for me and for my wife, of course, there’s a lot of stuff that hurts — especially when the majority of it is untrue,” Harry said. "But all we need to do is focus on being real, focus on being the people we are and standing up for what we believe in. I will not be bullied into carrying a game that killed my mum."

Meghan said in her 2019 ITV interview that she "never thought that this would be easy, but I thought it would be fair. And that’s the part that’s really hard to reconcile."

“If things were fair … If I’d done something wrong, I’d be the first one to go ‘Oh my gosh, I’m so sorry. I would never do that,' " she added. "But when people are saying things that are just untrue and they are being told they’re untrue but they’re allowed to still say them — I don't know anybody in the world who would feel like that’s okay."

"You know, because I’m from the States, you don’t grow up with the same understanding of the royal family and so while I now understand very clearly, there’s a global interest there," Meghan said during her engagement interview.

Harry talked about the death of his mother, Princess Diana, while being back in a place that was so close to her heart, saying it’s a “wound that festers.”

Meghan praised Queen Elizabeth in the couple's engagement interview, noting she has gotten to know her as both the monarch and as Prince Harry's grandmother.

"All of those layers have been so important for me so that when I met her I had such a deep understanding and of course incredible respect for being able to have that time with her. And… she's, she's an incredible woman," Meghan said. 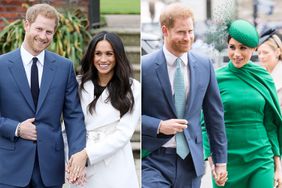 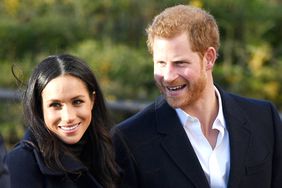 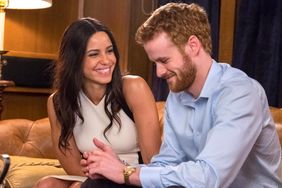