Kate Middleton and Prince William took their "most complex tour" yet in Pakistan — and they completely embraced the local culture!

Kate Middleton and Prince William arrived in Pakistan on Monday to celebrate the "unique bonds" between their two countries in a groundbreaking tour.

They received a warm welcome, including by the British High Commissioner, Thomas Drew, and some adorable children in traditional dress.

Kate arrived in a culturally inspired look — a twist on the traditional shalwar kameez. The royal opted for a stunning aqua blue bespoke flowing top and fitted pants by Catherine Walker (one of her go-to designers and a favorite of Princess Diana), which she paired with beige heels.

The royal couple stepped out for the first major outing of their tour on Tuesday, heading to the Islamabad Model College for Girls where they bonded with a group of teenagers over their shared admiration for Princess Diana.

Fourteen-year-old Aima told William and Kate they were "big fans" of the royal's late mother. William smiled and replied: "You were, really? Oh, that's very sweet of you. I was a big fan of my mother too"

They sat down at tables with kindergarteners and learned the benefits of students pursuing higher education and professional careers.

The royal couple then headed to Margallah Hills National Park to learned of efforts to monitor wildlife.

Inside the visitor center, Kate and William were shown a slideshow of animals found in the forested park such as leopards, cape hares, porcupines and a lizard.

“George would love that,” Prince William said of his 6-year-old son.

Kate changed into her second outfit of the day, wearing an emerald green tunic by Catherine Walker over cream pants from Pakistani designer Maheen Khan. She accessorized her look with a printed green scarf by Satrangi and earrings by Pakistani jewelry designer Zeen (her new go-to!).

Kate and Prince William went full glam for an evening reception held in their honor at the iconic Pakistan Monument.

The royal dad took a break from his usual suits to wear a traditional sherwani, a long coat-like garment worn for formal occasions. William opted to wear green, paying tribute to the color of his host country’s flag.

And the couple arrived in style: in a motorized rickshaw decorated in vibrant colors!

The royals headed to the mountains on Wednesday, part of their desire to see the effect that climate change and global warming are having on the local communities in the northern region of the country.

William and Kate walked on the northern tip of a glacier in the Hindu Kush mountain range — a stark example of the climate change crisis affecting the area. They saw how the glacier has retreated in recent years as a result of global warming.

William, who graduated from the University of St. Andrews with a geography degree, said: “Dr. Warren, my geography teacher, would be well impressed that I’m back at a glacier after all these years.”

The royal parents then headed into a village in a valley in Chitral, which has been hit by flash flooding in recent years. During their visit, they witnessed how farmlands have been destroyed by glacier melting.

They were also able to hear from locals about how they are changing their way of life.

Kate and Prince William headed to the SOS Children’s Village, a charity in Lahore that provides a home and family structure to over 150 boys and girls, on Thursday to celebrate the birthdays of three children — Iman, 12, Ibrahim, 6, and Daniyal, 8 — with games, music and traditional Pakistani cakes. And of course, no birthday is complete without singing “Happy Birthday.”

Kate even took the microphone for her first speech of their five-day tour. The mom of three even sprinkled in some Urdu!

The sporty couple then took part in the match with a group of children at the National Cricket Academy in Lahore on Thursday. The two teams had a mix of boys and girls from underprivileged backgrounds between the ages of 10 and 14 years old.

William took to the crease for the first few balls — and after missing one, made a fantastic hit out of the field for six runs. And he was applauded by Kate who stood at the opposite end of the field.

Kate’s efforts weren’t quite as successful — she was caught out twice.

The royal couple made a poignant stop at the Badshahi mosque in Lahore, the same place that Princess Diana saw during her 1991 visit to the country.

The couple then headed to the Shaukat Khanum Memorial Cancer Hospital in Lahore, which Diana also visited in the last years of her life.

Wafia Rehmani, 7, wore matching toy tiaras with Kate as she hosted a tea party on her bed. Wafia, who is from over the border in Afghanistan, has a kidney tumor. She wants to be a doctor and also showed the royal couple her toy medical set.

The royal couple returned to Islamabad to conclude their Pakistan tour on Friday, about 18 hours after the plane was scheduled to land. Terrifying electrical storms battered their Airbus A330 RAF Voyager jet, forcing them to return to Lahore after aborted landings at two airports.

Prince William and Kate’s first outing after their "bumpy adventure" involved spending the afternoon alongside dog handlers as they trained the animals to locate explosive devices.

The couple, whose Cocker Spaniel Lupo was the first new member of their household before they welcomed their three children, enjoyed the chance to take yellow Labrador puppies called Sky and Salto out on an agility course.

And that's a wrap! 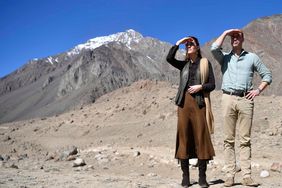 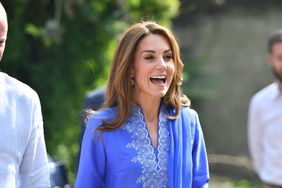 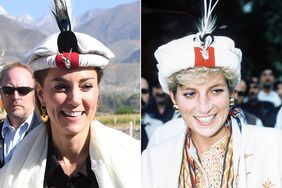 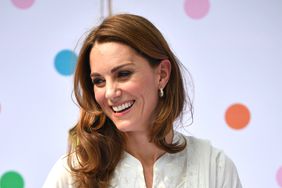 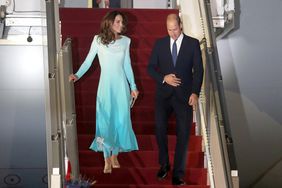 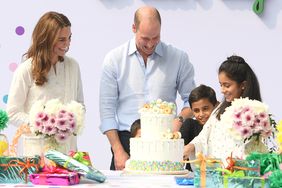 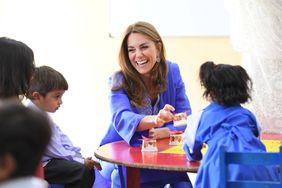 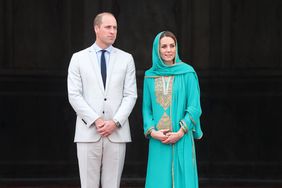 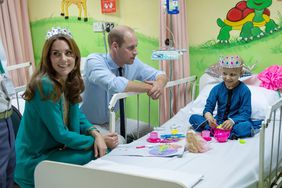 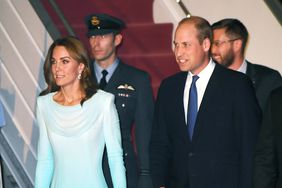 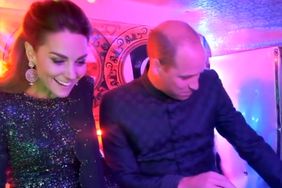 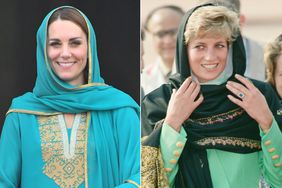