Elton John Says He Saw Queen Elizabeth Playfully Slap Her Nephew at a Party: 'I Am the Queen!'

"In private she could be hilarious," legendary musician Elton John writes in his new memoir about Queen Elizabeth

When Queen Elizabeth has a request, it’s best not to argue.

In Elton John‘s upcoming memoir, Me, the iconic singer wrote about witnessing a time when the monarch playfully slapped her nephew, Viscount Linley, across the face after he ignored her instructions to check on his sister, Lady Sarah Armstrong-Jones, after she fell ill at a party.

Linley then followed his aunt’s instructions. The Queen, noticing that John had witness the unexpected exchange, then winked at the musician and walked away.

“I know the Queen’s public image isn’t exactly one of wild frivolity, but… in private she could be hilarious,” John said in the book.

John’s memoir also tells the story of a dinner party he once held, where actors Richard Gere and Sylvester Stallone appeared to come very close to duking it out over Princess Diana.

The legendary singer, 72, writes that the London dinner party was held for former Walt Disney Studios chairman Jeffrey Katzenberg while John was working on music for the 1994 film the Lion King.

“Straight away, Richard Gere and Diana seemed very taken with each other,” writes John, explaining that at the time, Diana was separated from Prince Charles and Gere, now 70, had ended his relationship with Cindy Crawford.

“As the rest of us chatted, I couldn’t help notice a strange atmosphere in the room. Judging by the kind of looks he kept shooting them, Diana and Richard Gere’s newly blossoming friendship was not going down well with Sylvester Stallone at all,” he adds. “I think he may have turned up to the party with the express intention of picking Diana up, only to find his plans for the evening ruined.”

When it was time for dinner, John remembers that the group noticed that both Gere and Stallone, 73, were absent, and that his now-husband David Furnish discovered them “squaring up to each other, apparently about to settle their differences over Diana by having a fist-fight.”

Although Furnish was able to break things up, John notes that the tension between the trio was noticeable for the rest of the evening.

“After dinner, Diana and Richard Gere resumed their position together in front of the fire, and Sylvester stormed off home,” John writes, adding that the actor yelled that he “never would have come” if he knew “Prince f—n’ Charming was gonna be here.’ “

John’s autobiography offers up other revelations about his close friend, according to the Daily Mail, including details about their brief falling out, as well as their reconciliation following the death of their mutual friend Gianni Versace.

John has spoken about some of the trying moments in their friendship in the past.

During an interview on U.K. show Lorraine in 2018, shortly before Prince Harry and Meghan Markle tied the knot, John spoke about Diana, calling her a “great friend.”

“She was very much loved,” he said. “She was a controversial figure in some respects, but not to me. I loved her because she did so much for AIDS and she was a great friend to me. We had a falling out, but we reconciled in the end. It was an extraordinary summer. Gianni Versace was murdered [on July 15, 1997], and then Diana rang me up and we reconciled. And six weeks later, I’m in the same house, and she’s dead. It was extraordinary, and I just couldn’t believe what was going on.”

John’s autobiography Me is set to be published on October 15. 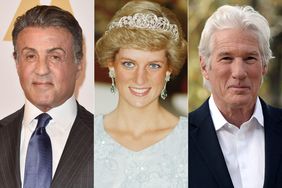