Dust Off The Tiaras! King and Queen of Spain Are Planning a Glamorous Visit to See Queen Elizabeth

Get the tiaras ready!

After a postponement last year, the King and Queen of Spain are set to visit Queen Elizabeth and the royal family in June.

King Felipe and Queen Letizia‘s State Visit, which will likely include a banquet at Buckingham Palace, will take place from June 6 to June 8. The couple will also stay at the palace as guests of the Queen.

Typically, there are two State Visits every year — one in the spring and one in the fall — which means the controversial visit by President Trump to the U.K. — which has been the subject of debate in Parliament following a massive protest petition — will not happen before the autumn if it is to take place at all this year. There is no confirmation of that date yet.

The Spanish royals’ visit was originally postponed last February because of political uncertainty in Spain.

Although Buckingham Palace can’t confirm which members of the royal family will be on hand to welcome the couple, all eyes will be on a potential glamour face-off between Queen Letizia and Princess Kate. Kate was in full princess mode during her first-ever state banquet to honor Chinese President Xi Jinping in 2015.

It is also likely that Prince Charles and Camilla will take a leading role in the visit. 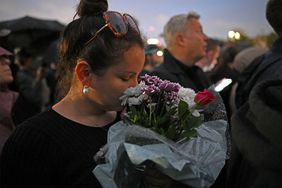