Hundreds of thousands congregate in Ottawa to see the royal newlyweds

Hundreds of thousands of revelers gave the Duke and Duchess of Cambridge a rock-star welcome in Ottawa, where the Canada Day celebration appeared bigger than ever.

“There must be five times more people here than normal,” says observer Sheila Ward, who works in the human resources department at Public Safety Canada in Ottawa. “And it’s because of Will and Kate. They are the main attraction. They are a wonderful, wonderful couple.”

On the second day of their North American tour, the newlyweds arrived in a familiar scene – in an open horse-drawn carriage, like the one they rode away from Westminster Abbey on their wedding day.

Dressed in the cream Reiss dress she wore in her official engagement pictures, Kate, 29, made Canadians proud on their national day by wearing Queen Elizabeth’s maple leaf brooch and a bright red hat by Sylvia Fletcher at Lock and Co.

As TV pictures were beamed into the square at Parliament Hill, the crowd waved maple leaf flags and cheered “Will and Kate.”

After they stepped out of the carriage, the royal couple stood for 10 minutes in the sunlight to watch the welcome ceremonies, including the royal salute. And the couple seemed to be enjoying the moment, smiling during the inspection of the guard of honor by the Governor General David Johnston.

Meanwhile, the smoke from a 21-gun salute filled the square. Shortly after a flyover by two Canadian Forces CF-18s shook the crowd, William, Kate and their hosts headed to the main stage to watch the festivities, which included a speech by the Prince.

William, who spoke at times in French, addressed his excitement about sharing this special moment with Catherine.

“She heard about Canada not from her parents, but from her grandfather, a wonderful man who passed away last year,” William said. “[He] held this country dear to his heart, for he trained in Alberta as a young pilot during the Second World War.”

Calling the event “a day of unity,” William said, “Catherine and I especially are so thrilled and excited by the prospect of the next eight days of being part of the Canadian family. It will be an adventure that we’ll never forget.”

Mom Would Be Proud

“It’s a once in a lifetime opportunity,” says Kerry Leclerc, 49, who works at an elementary school in Ottawa. “I remember when William was born. I think his mother [Princess Diana] would be so proud to see this beautiful young man at this moment.”

Leclerc waited with her sister Tammy, 44, a financial adviser at a bank in Montreal, since 3:30 a.m. to see the couple.

“Every time you see them in pictures or on TV they have that look between them and it will be amazing to see that up close,” Tammy said. “They have that special bond. They have something.” 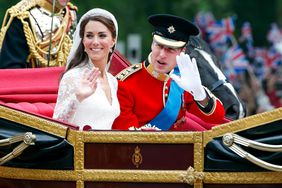