PEOPLE Goes to Camilla's Welsh Tea Party – and She Tells Her Guests to Take Doggy Bags!

Word of advice: If attending a tea party at the Welsh country home of Camilla, Duchess of Cornwall and her husband Prince Charles, come hungry.

There was no shortage of delectable treats at a charity tea party Camilla hosted on Wednesday at Llwynywermod, the Welsh home she shares with Charles. Among the goodies carefully laid out: jam tarts and scones topped with whipped cream, tiny squares of egg and ham sandwiches, mini sausages, jelly and cream and colorful cupcakes brownies galore.

But no one seemed to be touching them!

Perhaps the young guests were being too polite, or they were simply waiting to speak to their royal hostess first. But when Camilla came to their tables, she made it clear the treats were to be enjoyed: “Please remember to take some home with you,” she beseeched her invited guests.

“She was telling us to take as much food as we want in a doggy bag,” Bridget James tells PEOPLE. “She was really down to earth. When she moved away after talking to my daughter Elain got up to follow her.”

Five-year-old Elain has a condition called 22Q11.2 Deletion Syndrome, a serious congenital heart condition, and the family were one of six from T Hafan hospice for children in Wales treated to the party in a barn at the farmhouse in Carmarthenshire, Wales, that Camilla and husband Prince Charles own.

“When you have a child with a condition like this, you very often stay away from social situations, and you’re always on edge because you don’t know how it will be, and what reactions will be like. But when you know it’s a lot of families like ours, it’s fine,” James adds.

She was there with her 1-year-old daughter Martha, whom Camilla noticed was wearing the same floral dress design as Elain. And it brought a memory of her own grandchildren, the 5-year-old twins of her daughter Laura Lopes.

“She was saying that they try to dress the boys differently, but they always end up wearing the same thing!” says James.

Camilla, 67, spent about 10 minutes with each of the families, asking them about the benefits of the service they receive and inquiring about the children.

One boy, 9-year-old Jack Brown, was even serenaded with “Happy Birthday” (Camilla joined in) and was presented with cake. His sister Ella Brown, 10, has intractable seizures disorder and is a resident of the hospice.

Sipping tea with the family of 7-year-old Oliver Pedrick, she remarked on the lengthy Sid the Snake wrapped around him. Oliver has dystonic cerebral palsy and his twin, Evan, who has spastic cerebral palsy, was tucking into the jelly. “Jelly’s always a favorite – is that lovely jelly coming your way?” Camilla asked him.

Their mother Nikki Pedrick, 42, from Pontardawe, who is raising money so Evan can have an operation, says, “This is such a lovely, relaxing place to come.

“My other son, Joseph, has just been asked to have a kickabout and play football. But I wanted to keep him clean until he’d met Her Royal Highness.”

The afternoon, which is part of the couple’s annual #WalesWeek of events around the nation, ended with a performance of songs from musicals by the Carmarthen Youth Opera, and Camilla handed the children Buckingham Palace teddy bears dressed as guardsmen.

Earlier in the day, Camilla had joined a youth club shooting some pool, while Tuesday saw she and Charles draw pints of beer in a community-run pub. There, they were highlighting a rural initiative called Pub is the Hub, which encourages establishments to broaden the kinds of services they provide away from simply drink and food. 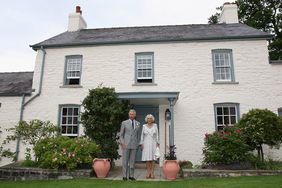 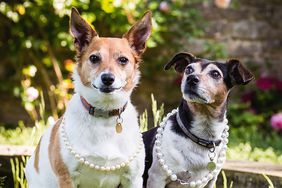 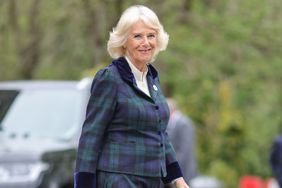 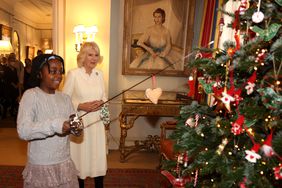