Brad Pitt on Prince Harry's Invictus Games: 'Bring It On!'

Brad Pitt has added his voice to celebrity support for Prince Harry‘s Paralympics-style games for injured servicemen and women – laying down a challenge to the British team.

The newlywed actor, 50, and two of his costars in the wartime movie Fury took time out of their promotion at a tank museum last week to make a short video.

Pitt, who plays an army sergeant in a tank crew in the WWII movie, says in the message: “We wanted to show our support for the Invictus Games and our wounded warriors.”

As they ended their short “good luck” message, Pitt and fellow actors Logan Lerman and Jon Bernthal and writer-director David Ayer laid down the gauntlet to the home team: “[To the] British armed forces team from all of us: Bring it on!”

“It’s amazing to see that we have the support of Hollywood stars for the Invictus Games. It makes all the difference knowing we have them cheering us on,” said Corie Mapp, a member of Britain’s sitting volleyball team, who was injured in 2010 by an IED blast in Afghanistan and lost both legs below the knee.

“It’s now less than a week away, and I really want the British public to come out in the thousands to cheer us on,” he added. “And here’s our message back to the cast of Fury: We accept the challenge, USA. We’ll be bringing it!”

Harry, 29, an army captain himself, came up with the idea for the games when he was in the U.S. watching the Warrior Games. He and the organizers have spent much of the last year turning the dream into reality, as the games kick off Sept. 10.

Some 400 competitors from 14 countries, including the U.S., which is sending around 100, are taking part in the four-day event, based mainly at the London Olympics sites.

Tickets are on sale via invictusgames.org. 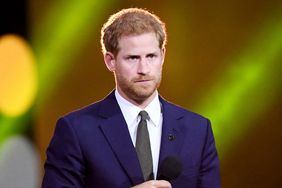