Archie, of course, is a shortened version of the name Archibald, meaning genuine and bold or brave. Archibald Campbell, 9th Earl of Argyll of Scotland was also an ancestor of Princess Diana’s. Using the nickname as a first name gives it a more casual, American vibe — while the baby’s middle name, Harrison, originated in the Middle Ages as a patronymic meaning “son of Henry” or “son of Harry.”

The surname Mountbatten-Windsor, meanwhile, belongs to all the children and descendants of Queen Elizabeth and Prince Philip.

Many fans quickly joked that perhaps the new parents are fans of the CW series Riverdale, which stars KJ Apa as the classic red-headed comic book character Archie Andrews.

There are plenty of other famous Archies, too, with many in the sports world.

Archie Manning is a former NFL quarterback, and dad to football superstars Eli and Petyon Manning.

Archie Moore, meanwhile, was an American boxer with the distinction of being the longest-reigning World List Heavyweight Champion of all time.

Other famous Archies include Archie Shepp, a jazz saxophonist, and Archie Griffin, the only football player to twice win the Heisman Trophy.

The name is also unisex, considering it’s the name of British actress Archie Panjabi, known for her role in The Good Wife.

Meanwhile, the newborn will not be receiving a courtesy title at this time, a royal source tells PEOPLE.

The proud new parents debuted their baby boy Wednesday morning in St. George’s Hall, the same location they had their wedding reception last May.

“It’s magic. It’s pretty amazing. I have the best two guys in the world, so I’m really happy,” Meghan said.

When asked whether the baby takes after anyone, Meghan said: “We’re still trying to figure that out.”

Harry added: “Everyone says babies change so much over two weeks. We’re basically monitoring how the changing process happens over this next month, really. His looks are changing every single day, so who knows?”

Did This Little Boy Inspire Meghan Markle and Prince Harry to Name Their Son Archie? 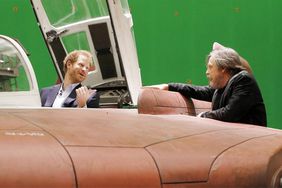