All About Pippa Middleton's Gigantic, 'G-Color' Engagement Ring – and How It Sizes Up Next to Big Sister Kate's!

“It’s hugely practical, because it’s quite flat and it will be very easy for her to wear,” says jeweler Annoushka Ducas, whose eponymous boutique off the King’s Road has been a go-to choice of Pippa, her sister Princess Kate and their mom Carole for years. “It’s a very timeless piece that will look as good now as it will in 50 years time. It’s bezel fit making it a bit more modern, which fits in very well with her style. If he has chosen that on his own then he has done brilliantly!”

Set in white gold or platinum with a center stone at least three carats in size, “the Art Deco design makes me think it could be bespoke or it could be vintage,” David Christopher Allen of 77 Diamonds tells PEOPLE.

“It’s not indicative of a particular jewelry house or designer, more of a period,” he adds. “When The Great Gatsby film came out a few years ago, Tiffany did a collection featuring similar things. It’s more of a style by era than a jewelry house. It doesn’t scream out one particular designer.”

He adds that from the pictures, the sheer size of the octagonal halo of diamonds and the center stone make it a very expensive piece – possibly costing more than $260,000.

The ring is strikingly different from the one Prince William gave to Pippa’s big sister back in 2010.

That ring, with its sapphire center stone in an oval shape surrounded by diamonds, famously belonged to William’s late mother, Princess Diana.

“Pippa’s Asscher cut ring is a classic design with a distinctive Art Deco feel,” Galton tells PEOPLE. “However, the octagonal halo of sparkling channel-set diamonds gives it the perfect sense of modernity.

“Asscher-cut diamonds are step cut, which means there are fewer facets than other fancy shapes, such as a princess cut for instance,” adds Galton of Mappin & Webb, which just launched their new-look flagship boutique on London’s famed Regent Street. “This means the clarity has to be of the very highest quality and close to flawless to show off the stunning structure of the diamond.”

Guy Burton, Director of Hancocks & Co. London, notes that the ring “looks like an Asscher-cut, bezel-set with a diamond set halo surround. This diamond halo accentuates the large cut corners of the Asscher and the design has really tried to emphasize those.

“The diamond is going to be at least G color plus,” says Burton, referring to the international diamond color-grading system, “as a low color would show up against this halo.” 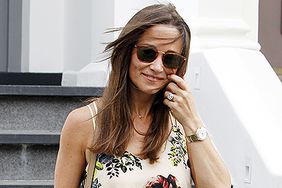 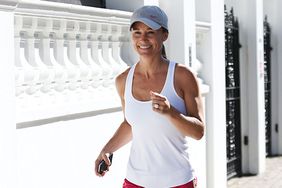 Super-Fit Pippa Middleton Takes Her Giant Ring Out for Jog (Of Course She Does!) 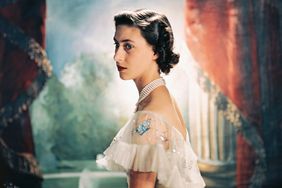