Those preparing for the dramatic sermon on a theme of global miscommunication and dislocation that is Babel would do well to consult Genesis 11:7-8, the verse in which God decides to incite labor unrest during the construction of a tower with its top in the heavens: ”Come, let us go down, and there confuse their language, that they may not understand one another’s speech. So the Lord scattered them abroad from there over the face of all the earth, and they left off building the city.”

God’s plan, theologians tell us, was to chastise human arrogance and slow mankind’s inexorable drive toward self-aggrandizement via the humility of confusion; His mission was to knock a project of Trump-size chutzpah off the map. But I’m less clear what director Alejandro González Iñárritu and screenwriter Guillermo Arriaga had in mind as the creators of Amores Perros and 21 Grams collaborated on the third of their characteristically flashy, collage-like, multicultural pileups. Here’s a story in which a stray bullet innocently let loose by a couple of shepherd kids in the scrubby, barren mountains of Morocco turns into an international crisis involving American tourists, a Mexican nanny, a deaf Japanese teenager, cops, border patrols, and embassies jumpy about terrorism. And yet for all the misunderstandings that accrue, with attendant sorrows and repentances, between husbands and wives, parents and children, cops and suspects, governments and governments, my compassion is undone by frustration, convinced as I am that no ensuing snafu would have been quite so catastrophic had Brad Pitt, as an apoplectic American abroad, not been asked to bellow and bully with such unsophisticated ignorance.

Borrowing handsome eye wrinkles and graypeppered hair from the George Clooney collection, Pitt plays Richard, who is seen early on lumbering along in a motor coach on a group tour through Morocco with his reproachful, anxious wife, Susan (Cate Blanchett), and a busload of other baleful white people. The miserable couple nurse bitter marital accusations understandable only much later in the saga, while their two cute blond kids back in California are tended to by an ideally loving Mexican nanny, Amelia (Amores Perros‘ Adriana Barraza, radiating maternal warmth).

Then Susan is wounded by the shepherd boys’ gunshot, seemingly from out of nowhere. And Richard starts screaming, cursing, threatening, and demanding like a guy in a bad movie: Where are cell phones, ambulances, Western doctors, diplomatic envoys when he needs them in the middle of the Berber desert? Why are the only people in the closest Moroccan village…Moroccan villagers? Why don’t they speak English, and why don’t they understand when he yells even louder?

His crisis — a butterfly effect designed to fray the nerves of skittish post-9/11 moviegoers — ripples outward. Stuck with no babysitter to relieve her, Amelia and her nephew (Gael García Bernal) drive the kids across the border to Mexico for her son’s wedding. (Not surprisingly, a Mexican mother’s desire to be at her beloved son’s wedding matters little to Richard. Is this seemingly sophisticated, affluent, attractive man not the ugliest gringo since…the ugly gringos in The Three Burials of Melquiades Estrada, also written by Arriaga?) In Japan, meanwhile, Chieko (Rinko Kikuchi, stunning in every moment of her first American picture) receives no part of Richard’s rage, but she’s tormented nonetheless — a confused teen still reeling from her mother’s death, and isolated by deafness (and sexually aroused adolescence) from communicating with her mournful businessman father (Memoirs of a Geisha‘s Kôji Yakusho).

Babel looks beautiful, never more so than when Brokeback Mountain cinematographer Rodrigo Prieto captures locals at ease among themselves: Unflappable desert village life, pulsing Tokyo teen culture, and a vibrant Mexican wedding are treated with reverence and delight, in unsubtle contrast to depictions of people lost in cultural wildernesses. But at some point — maybe just about the time we learn that the Japanese papa once went hunting in Morocco — the choreography of clashes (for which González Iñárritu won the directing prize at the 2006 Cannes film festival) begins to look busy for the sake of math, not for message. Measured in anything other than biblical cubits, the sum of Babel‘s many parts turns out to be a picture that suggests Americans ought to stay home and treat their nannies better. 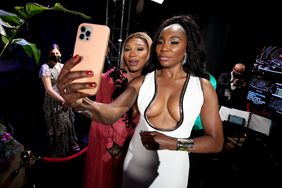 10 Great Photos from Backstage at the 2022 Oscars