Longtime conservative media personality Larry Elder has come under increasing scrutiny with his increased profile as the GOP front-runner seeking to replace Gavin Newsom as governor of California.

He built a significant fan base over years in radio, starting in the '90s, and he now leads the crowded field of more than 40 Newsom opponents.

But Elder's decades as a firebrand — including a history of controversial statements about women and race — and allegations of mistreatment by an ex-fiancée have fueled opposition to him even as he pitches himself as the best person to take over the country's largest state.

He and his campaign insist he's the kind of outsider who can upend liberal excess, though his beliefs place him at odds with many in California's Democratic majority.

Newsom, 53, has highlighted what he calls Elder's extremism in urging voters not to replace him.

Ballots are already being mailed back; election day is Tuesday.

The rules require that a majority of voters first choose to boot Newsom, a Democrat, after which the highest vote-getter from the list of alternatives would replace him.

Elder, a 69-year-old South Los Angeles native, has avoided debates. But that hasn't spared him from attacks, with other candidates taking aim at his history, including his stance against the minimum wage and his support for employers who want to ask women if they plan to have children.

At the time, Elder wrote in an essay in in Capitalism Magazine: "Women know less than men about political issues, economics, and current events. Good news for Democrats, bad news for Republicans. For the less one knows, the easier the manipulation."

Elder faced even more criticism after Politico published an interview with his ex-fiancée, Alexandra Datig. The pair met a Playboy Mansion in the early 2000s and became engaged in 2013 — with Elder reportedly planning for them to wed right after he got his star on the Hollywood Walk of Fame.

But Datig said that she broke off their 18-month engagement in 2015 after Elder allegedly took out a .45 pistol and "checked if it was loaded — while I was talking." She described it as a "Phil Spector moment," referring to the famed music producer who killed actress Lana Clarkson in 2003.

Elder denied threatening Datig, who also told The Los Angeles Times that he was allegedly abusive and controlling.

"I have never brandished a gun at anyone," he tweeted in response. "I grew up in South Central; I know exactly how destructive this type of behavior is. It's not me, and everyone who knows me knows it's not me. These are salacious allegations."

He told the Times, "I am going to deny the allegations of domestic violence," and a spokeswoman told the paper that the focus on what he had said on his radio show and in media appearances was ignoring the real issues around the election, like homelessness.

It was during a recent appearance to spotlight that issue that Elder was drawn into an altercation by someone in a gorilla mask who threw an egg at him.

He later suggested the coverage the incident received was part of a double standard that favored liberals. The police said they were investigating.

Elder, who describes himself as a libertarian, has said he would be able to govern despite the Democratic legislature through emergency powers and vetoes.

Polling shows he face major obstacles, however: The most recent surveys indicate voters are increasingly likely to keep Newsom. 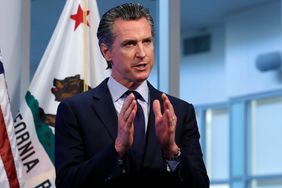 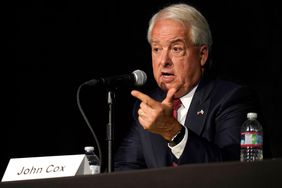