Learn more about Hope Hicks, 29, as she faces questions from House investigators about alleged Russian meddling in the 2016 presidential election

But her tenure is about to come to an end.

Just one day after she showed her loyalty to her boss when she met with the House Intelligence Committee as part of its investigation into Russia meddling in the 2016 election — and reportedly refused to answer the majority of the lawmakers’ questions — Hicks announced her resignation.

“There are no words to adequately express my gratitude to President Trump,” Hicks said in a statement provided by the White House Wednesday. “I wish the President and his administration the very best as he continues to lead our country.”

Although Hicks has generally stayed out of the media glare, she also made headlines earlier this month when it was revealed that she was reportedly dating White House aide Rob Porter, who was ousted after allegations that he abused both his ex-wives. (Hicks and Porter are reportedly no longer together.)

Here’s what you need to know about the elusive Hicks, who rarely speaks publicly and has no social media presence.

Hicks was born in 1988 and grew up in the the wealthy New York City suburb of Greenwich. She was co­-captain of the lacrosse team at Greenwich High School, and played lacrosse in college.

Before venturing into PR and politics, she modeled on a Ralph Lauren campaign and was the teen cover model for the first book of a Gossip Girl offshoot called The It Girl series, per Cosmopolitan. She even had a cameo on Guiding Light.

2. Hicks entered Trump’s inner sanctum via Ivanka — and modeled for her brand, too

After graduating from Southern Methodist University in 2010, where she played club lacrosse, Hicks headed for New York in 2012 to work at Hiltzik Strategies, a public relations firm. Her boss was Matthew Hiltzik, widely known as a Democratic PR operative who worked for both Hillary Clinton and film producer Harvey Weinstein.

While employed there, Hicks was assigned to work on a project for one of Hiltzik’s clients: the Ivanka Trump brand.

According to GQ, Ivanka was expanding her fashion line and tapped Hicks to do PR and modeling for the brand. Hicks even appeared online in a mint-colored dress, black clutch, and heels from the Ivanka Trump collection.

The dress was described on Ivanka Trump’s blog as perfect for jumping “on the shuttle to D.C. to do press for our upcoming hotel and come back to NYC in time for drinks with my boyfriend without having to change,” according to The Hollywood Reporter.

Ivanka and Hicks struck up a friendship through their working relationship, with Ivanka praising her as “brilliant, kind & wickedly” funny when she was named to Forbes‘ 30 under 30 list last year.

3. Donald Trump hand-picked Hicks to be his campaign spokesperson

In October of 2014, Donald Trump hired Hicks to work in-house for The Trump Organization — and just three months later tapped her for a job within his burgeoning campaign.

In January 2015, Hicks was working on the 25th floor of Trump Tower with Ivanka when she received a call from Trump to come into his office.

“Mr. Trump looked at me and said, ‘I’m thinking about running for president, and you’re going to be my press secretary,’ ” Hicks told New York magazine. “I think it’s ‘the year of the outsider.’ It helps to have people with outsider perspective.”

Her mother, according to the magazine, reportedly told her she should write a book about this experience someday. “She said it would be like Primary Colors, and I told her, ‘You don’t even know.’ ”

4. She was a political novice before working for Trump

Town & Country described her as “25 at the time and while she was a registered Republican, she had no experience in politics.”

5. But she hails from a family steeped in politics and public relations

Her parents met while working in Washington, with her mother working for a democrat from Tennessee and her father as chief of staff for a republican congressman from Connecticut, according to the Hartford Courant.

Her father, Paul Hicks III, is a former Republican Greenwich selectman and public relations executive who worked for the National Football League prior to taking his current job as managing director of the Glover Park Group.

Paul even has a day named after him in Greenwich — the Paul B. Hicks III Day, in honor of his service to the community.

While Hicks has no social media presence, during the campaign she took dictation from Trump to tweet.

A former Trump campaign official told Town & Country that Hicks “does everything from big important conversations to getting a cup of coffee … or whatever it takes to make [Trump] succeed in the moment. She puts his success above her own.”

This includes steaming Trump’s pants while he was still wearing them — and receiving a scolding when she forgot the wrinkle-erasing device, according to a new tell-all book by former Trump campaign manager Corey Lewandowski, Let Trump Be Trump.

“When we landed, it was Hope’s job to steam him. ‘Get the machine!’ he’d yell,” Lewandowski wrote. “And Hope would take out the steamer and start steaming Mr. Trump’s suit, while he was wearing it! She’d steam the jacket first and then sit in a chair in front of him and steam his pants.”

7. Relationship troubles on the campaign trail — and in the White House

The demands of the campaign led to a breakup with Hicks’ boyfriend of six years, according to GQ.

Since then, she has been linked to the married Lewandowski during the election, and more recently to Porter. In an excerpt from Fire and Fury, Trump allegedly told Hicks that she was “the best piece of tail [Lewandowski]’ll ever have.”

Earlier this year, Hicks was reportedly dating embattled former top aide Rob Porter, 40, who resigned on Feb. 7 amid allegations of abuse from his two ex-wives.

However, friends tell the Daily Mail, which first broke the Rob Porter domestic abuse story, that Hicks is no longer dating Porter. 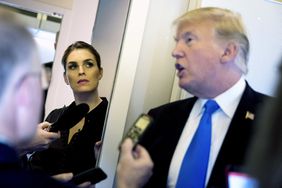 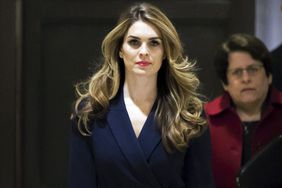 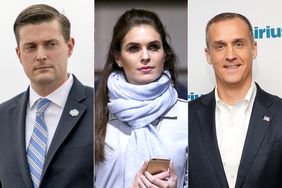 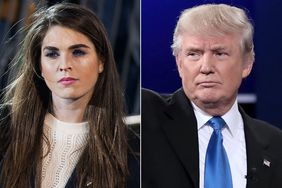 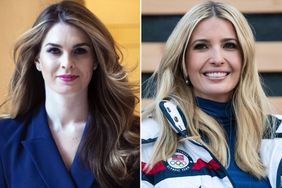 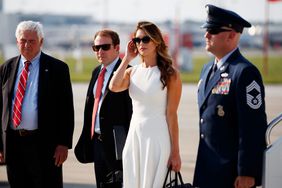 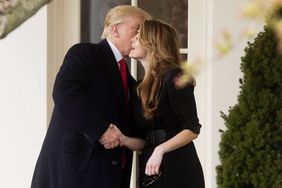 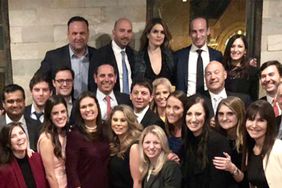