America's current and former commanders-in-chief are commemorating the day in a range of ways 20 years after the attacks on Sept. 11, 2001

In honor of the 20th anniversary of Sept. 11, 2001, America's current and former presidents are commemorating the day in a range of ways — visiting the sites of the attacks, delivering remarks, and, in the case of Donald Trump, calling a boxing match on pay-per-view.

Here's how the living presidents will mark the 20th anniversary of one of the most somber moments in U.S. history.

Current President Biden, 78, will visit all three sites of the Sept. 11 terror attacks: Ground Zero in Manhattan, a field in Shanksville, Pennsylvania, and the Pentagon (all three of which were sites where terrorists crashed passenger jets they had hijacked that morning). His wife, First Lady Dr. Jill Biden, is expected to join him.

At Ground Zero — the site of the twin towers of the World Trade Center, both of which fell after hijacked jets flew into each — the names of the victims have begun being read aloud in a ceremony expected to last several hours.

The ceremony will include six moments of silence, which will mark the moments each tower was struck, the moment each fell, the moment when the Pentagon was attacked, and when Flight 93 crashed in Pennsylvania after passengers are thought to have made their way into the cockpit to overtake the hijacker.

The Bidens were joined at Ground Zero in New York by former President Barack Obama, for whom he served two terms as vice president.

The 75-year-old former president made a surprise visit to the New York Police Department's 17th precinct on Saturday. Trump began by calling the anniversary "a very sad day for a lot of reasons," as seen in a video from NowThis News, before he criticized President Joe Biden's withdrawal from Afghanistan.

Then, turning his attention back to the men and women before him, Trump told those in attendance, "I grew up with you, and you are New York's finest. You're incredible people. And I know many of you."

He and his oldest son, Donald Trump Jr., also signed a contract to provide commentary during a pay-per-view boxing match, headlined by Evander Holyfield vs. Vitor Belfort.

The boxing event will air on the FITE streaming platform. The cost to view the event, according to FITE's website, is $49.99.

While in office, Trump marked the occasion in a more solemn manner, delivering remarks at services to honor the victims.

But the native New Yorker raised eyebrows for his initial reaction to reporters years ago, just hours after the towers fell.

Speaking to local TV station WWOR, Trump said in 2001 that, due to the towers falling, a building he owned was now the tallest in New York: "I mean, 40 Wall Street actually was the second-tallest building in downtown Manhattan, and it was actually before the World Trade Center the tallest, and then when they built the World Trade Center it became known as the second-tallest, and now it's the tallest."

Some years later, in 2013, Trump again offered an unusual response to the anniversary of the attacks. "I would like to extend my best wishes to all, even the haters and losers, on this special date, September 11th," he tweeted on Sept. 11, 2013.

Obama, 60, and his wife, former First Lady Michelle Obama, joined the Bidens at the Ground Zero ceremony on Saturday.

In a statement released Saturday morning, he said, in part, "We reaffirm our commitment to keep a sacred trust with their families — including the children who lost parents, and who have demonstrated such extraordinary resilience. But this anniversary is also about reflecting on what we've learned in the 20 years since that awful morning."

Noting that the "list of lessons is long and growing," President Obama continued, "one thing that became clear on 9/11 — and has been clear ever since — is that America has always been home to heroes who run towards danger in order to do what is right."

In 2016, while still in office, he delivered remarks at a memorial event held at the Pentagon, on what was the 15th anniversary of the attacks.

"We remember, and we will never forget, the nearly 3,000 beautiful lives taken from us so cruelly — including 184 men, women and children here, the youngest just three years old. We honor the courage of those who put themselves in harm's way to save people they never knew," Obama said at the time. "We come together in prayer and in gratitude for the strength that has fortified us across these 15 years. And we renew the love and the faith that binds us together as one American family."

Former President Bush, 75, who was commander-in-chief at the time of the 2001 terrorist attacks, will deliver keynote remarks at the Flight 93 National Memorial in Shanksville, Pennsylvania.

"Today we remember your loss, we share your sorrow and we honor the men and women you have loved so long and so well," he said in reflection of the passengers' bravery that day.

"Here, the intended targets became the instruments of rescue," Bush continued, "and many who are now alive owe a vast, unconscious debt to the defiance displayed in the skies above this field."

In a new BBC documentary ahead of the 20-year anniversary of the attacks, Bush spoke about the moment he first learned about the attack, when his reaction was famously captured on camera during a previously scheduled school trip.

At the time, he was visiting Emma E. Booker Elementary in Sarasota, Florida, where he was reading to a room of young children when White House Chief of Staff Andy Card delivered the news that the second tower of the World Trade Center had been hit (Bush had learned about the first plane en route to the school, but at the time assumed it was due to pilot error).

"Andy Card comes up behind me and says, 'Second plane has hit the second tower. America is under attack.' And I'm watching a child read," Bush recalled in the documentary. "And then I see the press in the back of the room beginning to get the same message that I just got."

"And I could see that horror … on the face of the news people who had just gotten the same news. During a crisis it's really important to set a tone and not to panic," he continued. "And so I waited for the appropriate moment to leave the classroom. I didn't want to do anything dramatic. I didn't want to lurch out of the chair and scare the classroom full of children, and so I waited."

Later in the day on Saturday, Bush and his wife, Laura, will host a screening of that documentary — 9/11: Inside the President's War Room — at the George W. Bush Presidential Center in Dallas.

Bill Clinton and Hillary Clinton joined the Bidens and the Obamas at Ground Zero on Saturday.

"America will never forget those who lost their lives, those who risked or gave their own lives to save others, and those whose lives were forever changed 20 years ago. We owe it to all of them to come together again with unity, hope, compassion, and resolve," the Clinton Foundation quoted the nation's 42nd president on Saturday.

"Twenty years on. We will never forget," Hillary added on Instagram.

Carter, 96, will mark the anniversary in private and is not scheduled to appear publicly on Saturday. He is America's oldest living former president. 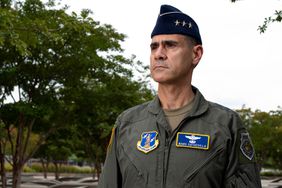 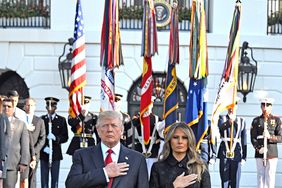 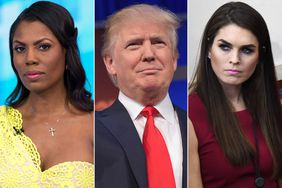