Roem, 33, was a local journalist who began her transition four years ago, but who ran her campaign on local platforms that did not focus on her identity, according to the Washington Post.

Marshall, 73, served as Prince William County’s delegate in the Virginia House of Delegates for the last 26 years, and has been elected to office 13 times.

He introduced a controversial “bathroom bill” earlier this year that would have required people to use restrooms corresponding to their assigned gender at birth, according to the Post. It was killed by a Republican-led committee in January.

Despite Roem’s being the first openly transgender person to be elected to office in the state, that was not the focus of her platform.

Instead, she directed her issues on jobs, education and northern Virginia’s traffic congestion. In October, Roem told NBC News that Marshall had been “misgendering me for months,” meaning he had referred to her using male pronouns.

As for what her win would mean for the election, Roem said she was aware of the effects it could have.

“I understand the national implications of this race,” Roem said. “I understand who it is I am running against. I understand what being the first elected, out, transgender delegate would mean.”

She continued, saying that if she won then “people across the country are going to know that they can succeed because of who they are, not despite it.”

Several people shared their exuberance of her election on Twitter. 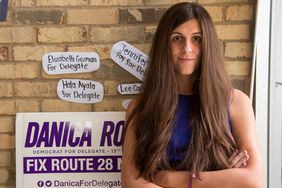