Rioters could be seen breaking windows and storming the Senate chamber

A large mob of pro-Trump rioters stormed the U.S. Capitol Wednesday afternoon, entering the Senate chamber and numerous Congressional offices in a chaotic scene during which one woman was fatally shot by police.

The Trump supporters, incited by the President's baseless claims that the election had been stolen from him, breached the building while lawmakers gathered to count the Electoral College votes certifying President-elect Joe Biden's win.

Thousands of Trump supporters had gathered to show their support for President Donald Trump amid his unfounded and increasingly incendiary claims of election fraud following his November loss to Biden.

Though the gathering began on the Ellipse, the park-like space on the Mall between the Washington Monument and the White House where Trump earlier led a rally, the group eventually moved from the Mall to the Capitol.

The rioters pushed through barriers set up along the perimeter of the Capitol building just after 1 p.m. EST. Much later, at 3:36 p.m., Trump press secretary Kayleigh McEnany tweeted that the president had sent in the National Guard.

Video footage taken at the scene showed people carrying "Trump 2020" and "Don't Tread on Me" flags clashing with police, many in full riot gear, near the Capitol building.

CNN reporters posted inside the House building reported hearing chants of "USA! USA!" as the rioters entered the building.

The Senate abruptly recessed and stopped the proceedings of tallying the votes after the building was breached. Lawmakers subsequently evacuated the building.

C-SPAN showed footage of tear gas being deployed inside the Capitol. Images widely circulated on television showed an armed standoff between a rioter and law enforcement.

A Capitol worker who found themselves trapped inside the besieged building tells PEOPLE it "was unlike anything I've ever seen before."

"The sirens were going off in the building, and they instructed us to lock the doors and barricade them and sit on the floor and shelter-in-place," the civilian worker tells PEOPLE.

"When we finally got to leave around 6, there were tons of police in the building and they were opening up the doors to let people out in very short increments of time."

D.C. Mayor Muriel Bowser announced she was issuing a 6 p.m. curfew for Washington D.C. as the events began to unfold.

Earlier in the day, in his remarks to supporters gathered outside, Trump said, "We will never give up, we will never concede."

Hours after the Capitol had been breached, Trump delayed telling his supporters to leave the building, tweeting first, "Please support our Capitol Police and Law Enforcement. They are truly on the side of our Country. Stay peaceful!"

Later, around 3:13 p.m., he added, "I am asking for everyone at the U.S. Capitol to remain peaceful. No violence! Remember, WE are the Party of Law & Order – respect the Law and our great men and women in Blue. Thank you!"

In a taped statement posted to his Twitter account at 4:17 p.m., Trump instructed rioters to leave peacefully, saying, "You have to go home now, we have to have peace." (The video has been removed or restricted from social channels including YouTube, Facebook and Twitter, due to "risk of violence.")

But he repeated his false claim that the election was "stolen" and said to the rioters, "We love you, you're very special."

In a speech from Wilmington, Delaware, Biden called on the president to take a firm stand against the rioters.

He added, "At this hour, our democracy is under unprecedented assault unlike anything we've seen in modern times. An assault on the citadel of liberty, the capitol itself."

Biden added, "Let me be very clear, the scenes at the Capitol do not reflect the true America," the president-elect asserted. "What we're seeing is a small number of extremists dedicated to lawlessness. This is not dissent, it's chaos."

Similar riots were reported in other parts of the country including in Kansas, where a group breached the state house and in Georgia, where a group gathered outside the Georgia Capitol, leading to an evacuation of lawmakers and staffers in the building. Staff in the Utah Capitol have been evacuated as well, according to reports. 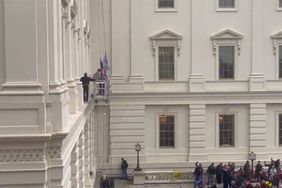