The White House press secretary’s office will soon have another occupant — again.

On Tuesday morning, First Lady Melania Trump announced that her spokeswoman, Stephanie Grisham, would be returning full-time to the East Wing after some nine months also serving as the press secretary and communications director for both her and President Donald Trump.

Grisham, 43, will immediately become Mrs. Trump’s chief of staff as well as continue to be her spokeswoman.

“I am excited to welcome Stephanie back to the team in this new role,” the first lady said in a statement. “She has been a mainstay and true leader in the Administration from even before day one, and I know she will excel as Chief of Staff.”

Mrs. Trump’s previous chief of staff, Lindsay Reynolds, “resigned early this week to spend time with her family,” according to the White House.

“I appreciate all that [she] did over the past three years, and wish her well in her future endeavors,” the first lady said.

Here Are All the Major Trump Team Players Who Heard ‘You’re Fired!’ — or Quit, Been Replaced or Moved On

She said in her own statement on Tuesday that her replacement in her vacated roles “will be announced in the coming days” and she would be assisting the transition.

RELATED VIDEO: Fran Drescher Reveals the Demand Donald Trump Made When He Made a Guest Appearance on The Nanny

Among the names reportedly in discussion to succeed her are the Pentagon’s spokeswoman, Alyssa Farah, who was previously the press secretary for Vice President Mike Pence, and Kayleigh McEnany, a Trump campaign spokeswoman.

Grisham, who worked in Republican politics in Arizona before joining Trump’s 2016 campaign as a press aide, has been notable — and controversial — for declining to hold daily press briefings for White House reporters, which were wound down under her predecessors.

Critics said this promoted a lack of accountability and transparency about administration policies.

Grisham is also known for her close relationship with the first lady.

Like predecessor Sarah Huckabee Sanders, she has been readily available to reporters behind the scenes rather than regularly appearing on TV and at news conference to take questions.

By way of explanation, Grisham has said that the president prefers to be his own communicator. 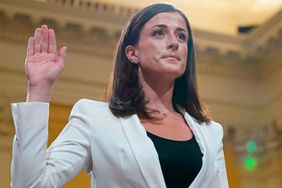