Mellissa Carone's criminal history and her proximity to Rudy Giuliani, who later said he got COVID-19, are now taking up the share of the headlines

The woman who went viral for her combatively chatty appearance at a Michigan hearing on behalf of the Trump campaign last week continues to speak her mind ... and raise eyebrows with her wild claims.

Speaking to a range of outlets, including national newspapers and TV shows as well as Sarah Palin's website, Mellissa Carone insisted the novel coronavirus (COVID-19) was created in a lab and funded by the Obamas.

She also said she wouldn't get tested for the virus, despite coming into close contact with Trump attorney Rudy Giuliani, who was reportedly hospitalized after testing positive over the weekend — days after they sat next to each other in Michigan.

Carone told The Washington Post that she doesn't "trust" tests for the virus. But, she said, she would get tested at the recommendation of a pro-Trump television network such as Newsmax or One America News.

"I would take it seriously if it came from Trump, because Trump cares about American lives," Carone, 33, told the Post, adding: "It is not that I don't believe in getting tested. I don't trust the tests."

Carone was put forward in recent days as a "whistleblower" by President Donald Trump's campaign while they have attempted to overturn election results in a number of states.

After her appearance in Michigan, however, it was revealed Carone had been previously charged with obscenity and computer crime in a convoluted episode involving her fiancé's ex-wife — even as both she and her fiancé said she wasn't responsible, though she did plead to a lesser charge. The ex said the couple had tormented her.

"I'm 100 percent credible," Carone told the Huffington Post, addressing her criminal history. "I've already talked to Trump and Giuliani about this." Carone then clarified: "I've talked directly to Giuliani that has spoken directly to Trump."

The Michigan resident reportedly worked at a large vote-counting center in Detroit as a contract IT worker for Dominion Voting Systems, a technology company used in many states that Trump has falsely claimed is part of a national conspiracy to steal votes from him.

Trump lost the November election to Joe Biden, who won a majority of both popular and electoral votes, according to tallies by the Associated Press.

Despite challenging vote totals in several battleground states, the president's efforts to prove the election was a "fraud" have not held up in court.

Trump's campaign attempted to use Carone as a key witness before Michigan state lawmakers last week, claiming she could back up so-far-evidence-free stories of widespread fraud.

A judge has already deemed her claim "not credible" in light of other witness accounts.

Nonetheless, Carone claimed to the oversight panel last week: "Everything that happened at that TCF Center was fraud. Every single thing."

"They were all in on it," she said then.

Challenged by one of the lawmakers who noted that the voting records did not substantiate her story, Carone doubled down: "What'd you guys do, take it and do something crazy to it?"

Carone's flippant and theatrical demeanor drew millions of views on social media and led to a Saturday Night Live parody.

For the record, Carone told Inside Edition, she "loved" Cecily Strong's version of her on SNL: "I think she did a great job. I think she was very funny. She looked just like me."

Carone had plenty more to stay during her various interviews since her moment in the spotlight last week.

She told SarahPalin.com, for instance, that in Michigan she witnessed "a big van [show] up at four in the morning with all the ballots marked for Biden. I believe there was no data loss. They found out Trump was ahead in my personal opinion, and sprung into action." (Carone's interview with the website, published on Tuesday, has since been taken down without explanation.)

Carone's claims differed from her sworn affidavit dated Nov. 8, in which she stated she witnessed vans "apparently bringing food" in to vote-counters but did not state she saw any "ballots marked for Biden."

In that affidavit, Carone claimed she saw unidentified workers counting the same ballots over and over again, though a Michigan judge found that her claims were not substantiated by anyone else who submitted affidavits.

Carone also alleged several generalized incidents of wrongdoing, including "overhearing" two other workers talking about "losing tons of data." And she criticized the behavior of others at the vote-counting center for leaving ballots unattended and demeaning Republicans. She also complained about the workflow, including a "chaotic" shift change process.

But it was Carone's criminal history and her proximity to Giuliani, who could be seen seemingly trying to shush Carone during the Michigan appearance last week, that are now taking up the share of the headlines.

On Sunday, President Trump announced that Giuliani had been diagnosed with COVID-19. Giuliani was reportedly admitted to Georgetown University Medical Center in Washington, D.C., on Sunday.

Despite sitting next to him and another attorney who has also reportedly tested positive for the virus, Carone has told various media outlets that she probably won't get tested and isn't afraid of catching the virus.

"I'm not concerned at all," she told Inside Edition. "If I start to get symptoms, I'll think about [getting a test.]"

Carone added that she also did not plan on quarantining, despite the fact that she had likely been exposed to the virus.

Carone has also spoken to reporters about being previously charged with first-degree obscenity and using a computer to commit a crime, which occurred after she allegedly sent explicit videos of herself and her fiancé to her fiancé's ex-wife amid what the Huffington Post's reporting described as years of bad blood between the three.

Though Carone initially denied she had done so to police, she later confessed once presented with evidence, according to the Huffington Post.

Now, however, she and her fiancé say he was the one who sent the videos and she merely took the fall for it. She pleaded guilty to a lesser charge of disorderly conduct and completed her 12 months of probation in September.

"It is sad people are diverting attention from election fraud to something completely different," Carone told the Post when asked about her past. (PEOPLE's efforts to reach her for comment were unsuccessful.)

Her fiancé's ex-wife had another view of Carone — telling the Huffington Post that Carone hadn't been political in the past.

"I just think this was an easy bandwagon for her to jump on," the other woman said. "She is a very calculating and methodical person." 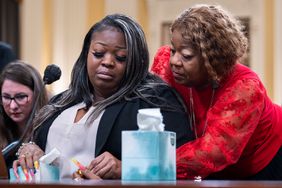 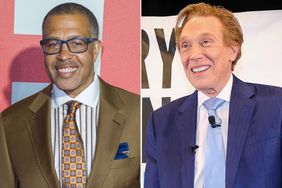 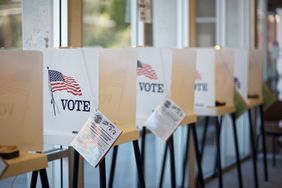