Donald Trump has tweeted another response to Michael Wolff’s headline-making book, Fire and Fury: Inside the Trump White House, and for the third time (in one day) the president called Steve Bannon “sloppy.”

Late Friday evening, Trump went on a Twitter spree, before zeroing in on the the author, whom he called “a total loser.”

“Michael Wolff is a total loser who made up stories in order to sell this really boring and untruthful book,” the commander-in-chief wrote about Fire & Fury, which was released four days early on Friday due to high demand.

On Thursday, Trump tweeted that he did not allow Wolff access to the White House. (Wolff has since denied that’s true.)

“[Wolff] used Sloppy Steve Bannon, who cried when he got fired and begged for his job. Now Sloppy Steve has been dumped like a dog by almost everyone. Too bad!” Trump also tweeted on Friday.

In a previous statement on Jan. 3, Trump blasted his former senior counselor, playing down Bannon’s role as a mere “staffer,” and saying he had “lost his mind” after being dismissed from the administration in August, over a year after the former Breitbart News chairman was announced as the White House chief strategist days after the 2016 presidential election on Nov. 13.

Trump’s lawyers have served Bannon with a cease and desist letter that claimed his statements in Fire & Fury constitute “defamation by libel and slander,” and violate a non-disclosure agreement Bannon signed as a campaign employee.

Also on Friday, Trump said in a tweet that the book was “full of lies, misrepresentation, and sources that don’t exist,” and called Bannon, “Sloppy Steve.” In a follow-up response, Trump reiterated Bannon’s nickname in a new tweet commending the Mercer family, the billionaire political donors, for cutting ties with the newly dubbed “Sloppy Steve.”

Not only was the release of Wolff’s exposé moved up half a week early, people are checking it out from libraries as fast as Harry Potter.

In addition to Bannon’s statements in the book, Wolff’s reporting sheds new light on the alleged dysfunction in his marriage with wife, First Lady Melania.

Wolff describes how the couple would sometimes go days at a time without contact during Trump’s presidential campaign — even when they lived together in Trump Tower.

“He and Melania spent relatively little time together… Often she did not know where he was, or take much notice of that fact,” Wolff writes, noting that Mrs. Trump also didn’t know about or show much interest in her husband’s business.

Trump also often spoke of his wife when she wasn’t there, referring to her proudly and without irony as his “trophy wife.” “He admired her looks — often, awkwardly for her, in the presence of others,” Wolff said.

Stephanie Grisham, communications director for the first lady, denied details of Wolff’s book in a statement obtained by PEOPLE, “This book is clearly going to be sold in the bargain fiction section. Mrs. Trump supported her husband’s decision to run for president and in fact, encouraged him to do so. She was confident he would win and was very happy when he did.” 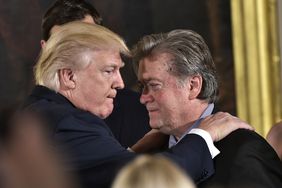 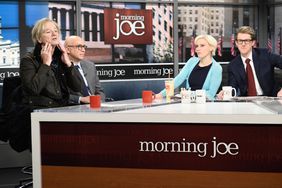