Three former Bachelorette contestants are publicly voicing their support for the Biden administration and its recently passed infrastructure bill, appearing in an ad aimed at women in three battleground states.

The ad was released Thursday by Democratic super PAC American Bridge 21st Century, as first reported by The Hill.

In the ad, the three praise the Biden administration for the $1.9 trillion American Rescue Plan passed in March and $1 trillion bipartisan infrastructure bill signed in November.

They encourage Americans to support the programs and point out why they believe both measures have helped the country.

"The American Rescue Plan has helped millions of Americans and is still available to help you," Johnson says in the ad.

Johnson, who appeared on The Bachelorette's 15th season, also touts the Biden administration's bipartisan infrastructure bill, which he says in the ad has created hundreds of thousands of jobs to fix roads.

Donald also touts the infrastructure bill, saying in the ad it will expand wifi access to rural communities.

"For all these reasons and more, we want to lend our support to these programs and to what the Biden administration is trying to do for America," adds Stone at the end of the video.

In a statement, the president of American Bridge 21st Century said Democrats "can't use the same tired tactics," and that this ad (and other influencer initiatives) will reach a new audience.

"We have to meet voters where they are and build trust with them, which requires new and creative strategies to reach the voters who delivered our victories in 2018 and 2020 and who will decide our fate in 2022," PAC president Jessica Floyd said. 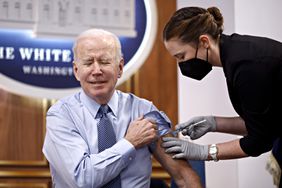