Though critics denounced President Joe Biden's handling of the exit, he said it was time to finish a "forever war" that had already cost too much

The war in Afghanistan is over.

After some $2 trillion, 2,400 American service members and 47,000 civilians killed; after the decisions of four presidents, the first of whom invaded with broad public support followed by two successors whose instincts to exit shifted under Pentagon advice; and after 19 years and 328 days — almost older than the youngest of the last troops who died in the last days of fighting — the U.S. withdrew from the Afghan capital of Kabul on Monday, ending the country's longest-ever military operation.

He invoked the 9/11 terror attacks, which sparked the war under President George W. Bush, and the killing a decade later of al-Qaida mastermind Osama bin Laden, which McKenzie called a "just end."

The withdrawal announcement came hours earlier than was publicly expected. (Likewise the U.S. kept secret the final date and time of its withdrawal from Iraq, in 2011.)

McKenzie said the final C-17 took off from Kabul's airport at 3:29 p.m. Monday, East Coast time, just before the clock struck midnight and Tuesday began in Afghanistan, which had been the deadline.

As McKenzie spoke, he said, the "last manned aircraft" was "now clearing the air space above Afghanistan."

The U.S. military controlled Hamid Karzai International Airport since mid-August, facilitating the evacuation of more than 100,000 people including U.S. citizens and numerous Afghans seeking refuge from the feared tyranny of the Taliban returned to power.

Pentagon officials said earlier Monday that "the largest airlift" in U.S. military history helped 122,000 people leave the country since July, including some 5,400 Americans.

While the White House has touted this logistical feat, the early scenes of chaos and violence — the U.S. Embassy quickly shuttered, desperate people clinging to the side of an Air Force plane, a baby handed over a security wall — also fueled fierce criticism.

A chorus of Republican lawmakers said that President Joe Biden, who pushed to confirm a departure initially agreed upon by the Trump administration, should resign.

Some of the families of service members killed during the evacuation operation savaged Biden's decision. One mother said he had "sent my son to die."

As a reporter noted at a Pentagon briefing earlier Monday, estimates say 80,000 Afghans who helped the U.S. during the war remain stuck in the country now that the U.S. military is gone.

"There's a lot of heartbreak associated with this departure. We did not get out everybody we wanted to get out," McKenzie said as he announced the withdrawal.

He said there were no evacuees left at the airport before the last plane left.

The Biden administration has acknowledged the disarray in the Afghan capital caught them by surprise as the government evaporated in the face of a Taliban offensive that reached the gates of Kabul in a matter of weeks while America wrapped up its planned exit.

The Afghan army, bolstered by tens of billions in weaponry and support but worn down by institutional dysfunction and at cross-purposes with U.S. strategy, did not oppose the Taliban.

And so this month the religious militants, who had originally shielded al-Qaida after 9/11 and had been toppled by a U.S.-led invasion that began on Oct. 7, 2001, boasted of again being in charge. (The details of their government remain in transition; pockets of resistance have also been reported.)

President Biden admitted mistakes in how the withdrawal unfolded and said he, ultimately, bears the blame for consequences of these choices.

But he repeatedly said he has not wavered in deciding the war, which had long been polarizing at home, should end.

"I'm left again to ask of those who argue that we should stay: How many more generations of America's daughters and sons would you have me send to fight Afghanistan's civil war if Afghan troops will not? How many more lives, American lives, is it worth?" Biden, 78, said in a White House speech two weeks ago. "How many endless rows of headstones at Arlington National Cemetery?"

"I'm clear on my answer," he said then. "I will not repeat the mistakes that we've made in the past."

On Sunday he and First Lady Dr. Jill Biden flew to Delaware to meet the families of 13 U.S. service members killed along with some 170 others last week in a suicide bombing at one of the Kabul airport gates, days before the withdrawal was completed.

He said in a speech on Friday after the bombing that there would be retaliation for those responsible.

As for the Afghans who still wish to escape their country and the Taliban, Gen. McKenzie said Monday that the solution would be a diplomatic and not a military one.

In his own statement on Monday, Biden said he had "asked the secretary of state to lead the continued coordination with our international partners to ensure safe passage for any Americans, Afghan partners and foreign nationals who want to leave Afghanistan."

"For now, I urge all Americans to join me in grateful prayer tonight," he said: "for our troops and diplomats who carried out this mission of mercy"; for "the network of volunteers and veterans who helped" evacuees; and for "everyone who is now — and who will — welcome our Afghan allies to their new homes around the world, and in the United States." 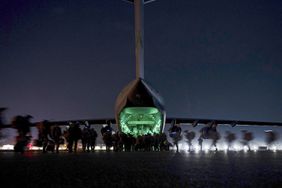 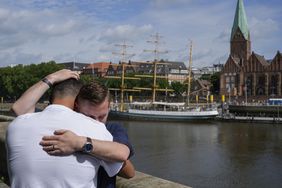 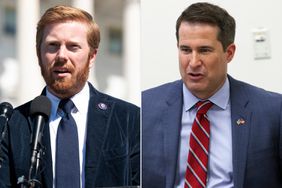 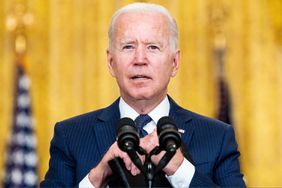