A candidate for governor in Virginia is hoping Taylor Swift fans will help him win the race.

In new digital ads, Democrat Terry McAuliffe links his opponent, Republican Glenn Youngkin, to the sale of six master recordings of Swift albums in a deal the singer has said became her "worst nightmare."

McAuliffe, who served as governor of Virginia from 2014 until 2018 and hopes to win again on Nov. 2, spent five figures for the ads to appear on Facebook, Instagram and Google, according to The Verge.

Youngkin is the former co-CEO of the Carlyle Group, which financially backed the 2019 sale of Swift's former label, Scott Borchetta's Big Machine Records, to Ithaca Holdings, a company run by Scooter Braun, for $300 million.

The transaction, which Swift sharply criticized, included rights to her first six albums. The ensuing controversy drew rafts of headlines and comments from all sides.

Swift herself spoke extensively about the deal, even calling out Youngkin's former company for its part in the sale that, she said, made it difficult for her to perform her own songs or use them in her Netflix documentary Taylor Swift: Miss Americana.

"I'm especially asking for help from The Carlyle Group, who put up money for the sale of my music to these two men," Swift tweeted in 2019, urging fans for support.

McAuliffe's ads are reportedly targeted at voters who engage with Swift content on Facebook and Instagram or who are searching for the singer through Google in Virginia. The ads contain #WeStandWithTaylor — a hashtag fans use to support the singer in the dispute over rights to her music — the as well as images of Swift and Youngkin.

While Virginia has increasingly trended Democratic in recent years and McAuliffe is a former governor, some polls show that the Nov. 2 election is close, with McAuliffe in the lead.

Youngkin's campaign spokesperson Christian Martinez responded the Swift-inspired ads, telling Axios, "Terry McAuliffe has reached the stage of desperation in his campaign where he's rolling out the most baseless attacks to see what sticks. It's a pathetic fall that could only be achieved by a 43-year political hack."

Swift has been re-recording her old music as well as updating some of the songs and enlisting other singers like Chris Stapleton and Ed Sheeran to join her on new recordings of previously unreleased songs.

"I can't express my gratitude enough to these artists for helping me bring these songs to life. I can't wait til we can dust off our highest hopes and relive these memories together," Swift said of an upcoming re-release of Red, due Nov. 12. "We'll also be making a bunch of new ones too, since Red (Taylor's Version) includes so many songs you haven't heard yet." 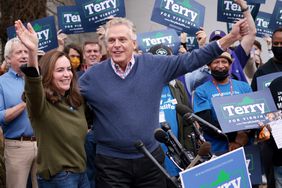 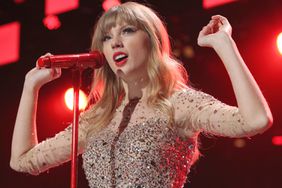