As President Donald Trump continues to double down on North Korea's escalating nuclear threats, many Americans are wondering: Just how worried should we be?

As President Donald Trump continues to double down on North Korea’s escalating nuclear threats, many Americans are wondering: Just how worried should we be?

Count Chrissy Teigen among the confused.

On Twitter Friday, the 31-year-old model and cookbook author summed up the big question on everyone’s mind: “Honestly should we be getting [gas] masks and canned food?” she wrote. “How real is this? I am just cooking and online shopping like I’m not about to die.”

She wasn’t the only one pondering the possibility of nuclear war.

Stars including Patton Oswalt, Patricia Arquette, Conan O’Brien and Alyssa Milano have all spoken out about the North Korea threats — with Milano expressing shock over articles that instruct readers on how to survive a nuclear war. “I MEAN… THIS IS WHERE WE ARE NOW?!” she wrote. “SERIOUSLY?”

On Friday morning, Trump tweeted that the military is “locked and loaded, should North Korea act unwisely.”

On Thursday, Trump refused to back down from his controversial statement earlier in the week to use “fire and fury” against North Korea and Kim Jong Un — telling the crowd during a press conference at his Bedminster, New Jersey, golf club that, “Frankly, the people who were questioning that statement — was it too tough — maybe it wasn’t tough enough.”

“They’ve been doing this to our country for a long time, for many years,” Trump continued, while Vice President Mike Pence stood silently by his side. “And it’s about time that somebody stuck up for the people of this country and the people of other countries.”

Following the president’s initial “fire and fury” comments on Wednesday – which were spurred by reports that North Korea may have successfully created a miniaturized nuclear warhead that can fit inside its missiles – North Korea said it was making plans to launch four intermediate-range ballistic missiles toward the U.S. territory of Guam, reported the New York Times.

According to North Korea’s official news agency, Gen. Kim Rak-gyom – the Korean People’s Army’s strategic force commander – further said that Trump is “bereft of reason,” and that his comments were “a load of nonsense,” per the Times.

But Trump rebuffed any suggestion this his threat was “nonsense” on Thursday, stating that “North Korea better get their act together or they’re going to be in trouble like few nations have ever been in trouble in this world.”

The president also attempted to assure an increasingly nervous nation, saying Thursday that Americans “should be very comfortable” and not worry — adding that if North Korea does “anything” against the U.S. or our allies, “Things will happen to them like they never thought possible.”

Trump refused to confirm if the U.S. would launch a preemptive strike, however, stating, “We don’t talk about that.”

So, should American’s be worried?

The Washington Post reached out to a handful of experts in the area to see — and the consensus was reassuring: All appeared to agree that the current threats are no higher than usual, and that Americans shouldn’t be planning for nuclear holocaust anytime soon.

“In many ways the pattern of belligerent rhetoric and weapons demonstrations is similar to previous years, and — importantly — conflict is still unlikely,” Alison Evans, deputy head of the Asia-Pacific desk at IHS Markit’s Country Risk team, told the Post.

“We should be aware of the possibility of conflict,” added Catherine Dill, senior research associate at the James Martin Center for Nonproliferation Studies.

Dill then said something sure to reassure Teigen.

“But I’m certainly not stocking up on canned goods any more than I normally do.” 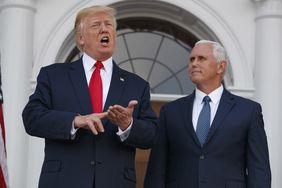 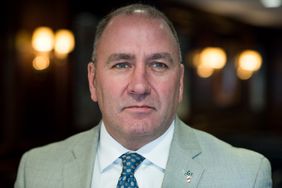 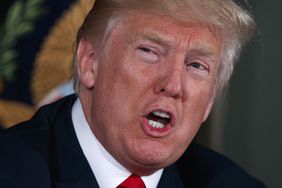