Reese Witherspoon, Kerry Washington & more celebrities are encouraging fans to get out and vote ahead of the upcoming Nov. 3 election

Election season is upon us!

With Election Day fast approaching on Nov. 3, celebrities are sharing how they're casting their votes ahead of time, in hopes of encouraging fans to follow suit — whether by voting in person or by mail. (Want to vote early as well? Check out vote.org for all the basics you need to know about where, how and when to do it in your state, or get even more information in our voting guide.)

Whether it's a sticker, a selfie or a strut to the mailbox, here's how Madonna, Kerry Washington and more stars are celebrating doing their civic duty ahead of the presidential election between Democratic nominee Joe Biden and Republican incumbent Donald Trump next month.

"Guys, have you voted yet or what?" Banks asked her followers before singing a little tune about voting.

Voting early is a a family affair for Faith Hill and Tim McGraw, who exercised their right to vote alongside their daughter, Audrey.

What? Like voting early is hard? Reese Witherspoon showed off her mail-in ballot envelope on Instagram, captioning the her selfie, "I did it! Did you?" and adding, "Feels good to exercise my right to VOTE."

Goldberg walked her followers through filling out an absentee ballot in an effort to make sure that they don't forget a few pivotal things (like to sign and date the envelope and not forgetting a stamp).

The Parenthood actress posted a video on Instagram, proudly adorning herself with her 'I Voted' sticker, captioning the clip, "WELP I STRAPPED ON MY PEARLS AND MY SUNDAY BEST AND VOTED EARLY BY DROPPING OFF MY MAIL IN BALLOT AT A SECURE LEGAL DROP OFF BOX AND IT WAS SO SEXY AND GOOD MY FRIENDS!" The actress then added some helpful voting information for her followers and encouraged them to head to the polls.

"Done and Done. Get out there folks and make your voice heard. Only you can do it," the Supernatural star captioned a photo of him with this 'I Voted' sticker and a shirt that said "Vote. Our future depends on it."

The Real Housewives of Atlanta star posted a photo of the line to vote early, telling her followers that it "wrapped around the building!!" She added, "But guess what my ass ain't going nowhere!!! COME ON GUYS let's do our part!!"

Nothing funny about this Saturday Night Live cast member's right to vote! Zamata captioned a photo of her dropping off her ballot, "Just over here participating in democracy, hope you do the same ✌🏾 ." She advised, "And if you’re mailing your vote in, make sure you drop it off at an official ballot box or polling location (should be listed online or on your ballot materials), because some people are putting out fake ballot boxes, LOL what a world! #vote"

The model (and Leonardo DiCaprio's girlfriend) posted a selfie wearing an "I am a voter" mask after voting early.

Come on, Vote! Let your body move to the polls... OK, OK we'll stop. The Material Girl herself showed off her new pink locks and the rosy glow of a responsible voter in a series of selfies on Instagram after casting a vote for Biden. "The 3 faces of a girl who just Voted!! 🇺🇸🇺🇸🇺🇸" she captioned the photos. "Get out there and take responsibility people!! #bidenharris2020"

The new dad has at least two things in common with Madonna: he, too, has pink hair, and he voted!

How Stars Are Helping Get Out the Vote

The Scandal star decked herself out in red, white and blue to cast her vote early — with a little help from her furry friend, Josie B.

An eye-catching reminder courtesy of the "Last Hurrah" singer to get your vote in — and to proudly display your congratulatory sticker however you see fit.

The This is Us actress – who recently announced that she's expecting her first child with husband Taylor Goldsmith — pulled out all the stops in her PSA to get fans to vote early or by mail, strutting her way to her mailbox in knee-high Stuart Weitzman boots emblazoned with the word "VOTE" to send out her ballot.

The expecting star also got the next generation involved, affixing her I Voted sticker to her bump.

Ferrell got on board with I am a Voter's nonpartisan movement to help get people to the polls (or to vote ahead of time!) with their #runwaytothepolls challenge.

"Couples who vote together, stay together," the newly-engaged Emily in Paris actress captioned a photo of her and her fiancé voting early by mail.

If you had any doubt about how Cabello feels about participating in the election, she can let her mask do the talking.

Forget about the Kissing Booth – Perez is all about the voting booth! Well, the ballot box, to be specific. The actor playfully staged an "electoral photo shoot" while dropping off his ballot. "Our votes matter and the only way to change our state/community/country is by educating ourselves with all the resources at our fingertips and committing to our our future," he wrote in part on Instagram.

"So. a lot of you have been asking me about my skin care routine: i start by voting as early as possible for #joebiden and #kamalaharris and all the other democratic candidates," the High Fidelity actress quipped on Instagram. For those looking for a more specific breakdown of her routine, she added, "then try some eye cream if you haven't been sleeping well because the president is a racist."

Speaking of the key to a clear complexion: see Elle Fanning's "#voteearly glow."

When Michelle Obama challenges you to do something, you accept it. The Black-ish actress snapped a selfie with her ballot before filling it out and sending it early by mail. In turn, she challenged pals Van Lathan, Dwyane Wade and Jennifer Aniston to "get their #VotingSquad together and vote early too!"

The country star knows voting is worth any inconvenience - even having to listen to a "business spreadsheet phone yeller guy" the entire time you wait in line. 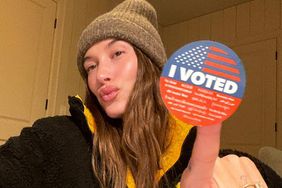 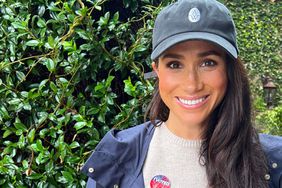 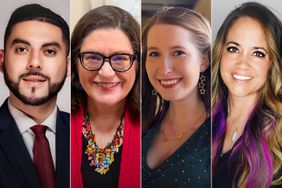 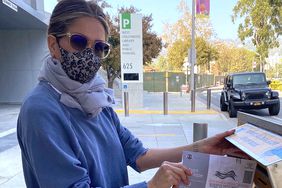 Jennifer Aniston Says 'It's Not Funny to Vote for Kanye' as She Votes for Joe Biden: 'Please Be Responsible' 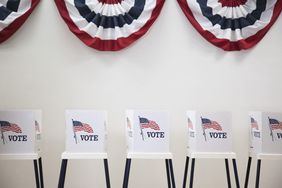 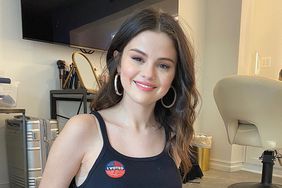 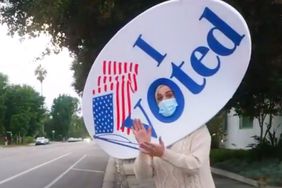 Fla. Woman in Labor Stops to Vote on Way to Hospital: 'She Was Very Happy That She Got to Vote' 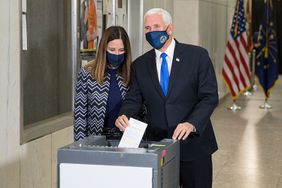 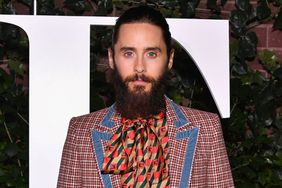 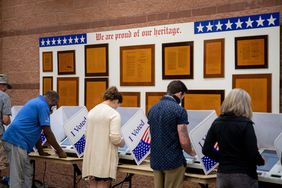 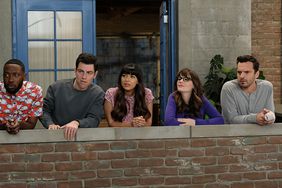 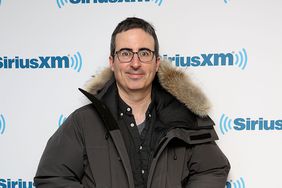