Rick Perry is returning to politics in an unlikely fashion.

The former Texas governor, two-time presidential candidate and Trump Cabinet secretary threw his support behind a bill that would create a research study into using psychedelic mushrooms to treat veterans dealing with post-traumatic stress disorder.

The bill was introduced by Democratic state lawmaker Rep. Alex Dominguez and calls for further research into the medical benefits of psilocybin, which is the hallucinogenic chemical found in so-called "magic mushrooms."

In an interview Tuesday with the Texas Tribune, the former state governor admitted that he's "historically been a very anti-drug person" but that he believes psychedelic drugs, provided in medical doses, can be effective in treating depression and PTSD.

"All of that properly done in the right type of clinical setting will save a multitude of lives," Perry, 71, told the Tribune. "I'm convinced of it. I have seen it enough of these young men."

Perry, who served as an energy secretary under President Donald Trump from 2017 to 19, said the bill "may be one of the most hopeful pieces of legislation" Texas lawmakers consider this year.

Dominguez's bill would call for a three-and-a-half year research study into the benefits of psilocybin.

The legislation would also call on the Texas Health and Human Services Commission to collaborate with one university hospital and one Veterans Affairs hospital in conducting its own research while also doing a review of past studies on the medical benefits of the drug.

Psilocybin is still illegal and classified as a "Schedule I" drug by the Justice Department, alongside drugs like heroin and LSD.

However, there's been increased interest in recent years about psilocybin's potential medical benefits when taken in small doses. Medical schools at universities like Johns Hopkins University and University of California-Berkeley have opened research centers in recent years dedicated to studying it.

Oregon became the first state to legalize psilocybin in November.

"We need options. And this is a valid therapeutic option that could help thousands of people," psychotherapist Thomas Eckert, who pushed the state for years to pass the legislation, told The Oregonian after the measure passed last year.

Some U.S. cities — like Oakland, California — have legalized the psychedelic drugs, as well.

The Tribune reports that Texas has been slow to rethinking some drug use, noting the state has cautiously approached legalizing medical uses for marijuana compared with other states.

Perry told the outlet he's had talks with the offices for current Gov. Greg Abbott and Lt. Gov. Dan Patrick about the potential benefits of psilocybin.

The former Texas governor said he hopes Republicans in the state can "get comfortable [that], 'Hey, this is not some recreational drug thing' " but instead is a potential new medication to aid veterans and others with PTSD. 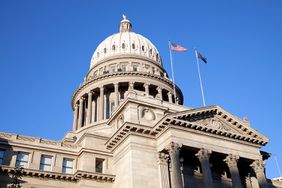