In an Oval Office interview, the president told Reuters what he expects will happen if he's impeached

Implicated in two felony campaign-finance violations for which his personal attorney is headed to prison, President Donald Trump is warning that, if he is impeached for his own alleged role in those crimes, “people would revolt.”

“It’s hard to impeach somebody who hasn’t done anything wrong and who’s created the greatest economy in the history of our country,” the president, 72, said with unsubstantiated hyperbole during a Tuesday interview with Reuters.

“I’m not concerned, no,” he continued. “I think that the people would revolt if that happened.”

Trump spoke with Reuters on the eve of his former lawyer’s Wednesday morning sentencing hearing in federal court. That attorney, known as Trump’s longtime “fixer,” admitted to prosecutors that he arranged payments in a total of $280,000 to keep adult film star Stormy Daniels and ex-Playboy playmate Karen McDougal quiet—during Trump’s 2016 presidential campaign—about the sexual affairs they say they had with the New York real estate developer. (Trump has repeatedly denied the affairs.)

Cohen said that he organized the payments “for the principal purpose of influencing the election,” which constitute a violation of campaign finance law, according to the New York Times. Moreover, Cohen told prosecutors that he “acted in coordination and at the direction of” an unnamed individual, clearly referring to Mr. Trump.

Cohen was sentenced to three years in federal prison on Wednesday for his role in the scandal.

On Monday morning, the president fired off a series of tweets in which he disputed claims that the hush-money payments Cohen gave to the alleged mistresses were a “campaign contribution.”

In a set of misspelled tweets, Trump piggybacked off of a recent Fox News report about how “Democrats can’t find a Smocking Gun tying the Trump campaign to Russia after James Comey’s testimony.”

Echoing a claim he’s made many times before, Trump remarked, “That’s because there was NO COLLUSION” adding, “So now the Dems go to a simple private transaction, wrongly call it a campaign contribution…which it was not.”

Trump continued his forceful defense during his interview with Reuters.

“Michael Cohen is a lawyer. I assume he would know what he’s doing,” the president said in response to a question about discussions he had with Cohen regarding campaign finance laws, according to the outlet.

The president was also dismissive when asked about prosecutors’ claims that his staff colluded with Russian officials before and after the 2016 presidential election.

“The stuff you’re talking about is peanut stuff,” Trump said, according to Reuters.

He then turned his attention to his rival in the 2016 election, Hillary Clinton.

Despite Trump’s adamant denials, he reportedly fears the possibility of impeachment.

“I did talk to a source close to the president who said earlier this evening that the president has expressed concern that he could be impeached over some of these issues that you just talked about,” Jim Acosta, CNN’s chief White House correspondent, told Anderson Cooper on CNN on Tuesday.

“He has said it’s a ‘real possibility,’ according to this source, but at this point he doesn’t see it as being certain,” Acosta added.

In August, Trump told Ainsley Earhardt on Fox & Friends what a “great job” he’s doing as president as a way to deflect questions of impeachment.

“If I ever got impeached, I think the market would crash,” he told Earhardt. “I think everybody would be very poor because without this thinking you would see — you would see numbers that you wouldn’t believe in reverse.”

In order to be impeached, the House of Representatives would have to reach a majority vote. This is a possibility once Democrats retake the House in January, according to Politico. In order for the president to be convicted, the Senate would need 67 votes — an unlikely occurrence considering that Republicans maintain control of the Senate.

Donald Trump 'Has Expressed Concern' That He Will Be Impeached: Report 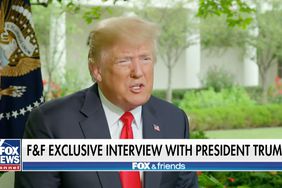