Pete Buttigieg flashed his wedding ring during his speech at the Democratic National Convention on Thursday night and said it was proof "how this country can change."

"Just over 10 years ago, I joined a military where firing me because of who I am wasn't just possible—it was policy," Buttigieg, 38, said, referencing the U.S. military's infamous "Don't Ask, Don't Tell" policy, which banned people who identified openly as LGBTQ from serving.

The law was repealed under former President Barack Obama's administration in 2011. (Buttigieg served as a U.S. Naval lieutenant in Afghanistan in 2014.)

"Now in 2020, it is unlawful in America to fire anyone because of who they are or who they love," Buttigieg said. "The very ring on my finger reflects how this country can change."

Buttigieg made history as the first openly gay man to run for president during the 2020 run, which saw his campaign pull off a surprising, though narrow, victory in the Iowa Caucus.

The former South Bend, Indiana, mayor's caucus win was also history-making, as he became the first openly gay man to win primary delegates as he hoped to win the Democratic nomination, which Joe Biden accepted on Tuesday.

"Love makes my marriage real, but political courage made it possible," Buttigieg said on Thursday.

Chasten, who frequently accompanied his husband on the campaign trail, tweeted a photo of him and Pete together, wearing protective face masks, with the caption: "Are you ready, #TeamPete?"

His upcoming memoir, I Have Something to Tell You, is scheduled for release in September and will tell the story of his husband Pete's history-making presidential campaign.

Buttigieg's bid for the White House fell short when he announced he'd suspend his campaign in early March and endorsed Biden, before the 77-year-old nominee ran away with the Democratic race following a string of primary wins on Super Tuesday.

Soon after, the former Indiana mayor threw his support behind Biden, telling voters to elect Biden as the next president.

"Joe Biden is right, this is a contest for the soul of the nation," Buttigieg said. "To me, that contest is not between good Americans and evil Americans. It's the struggle to call out what is good in every American." 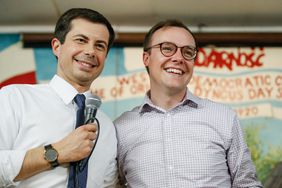