The footage was shared during Donald Trump's impeachment trial Wednesday

U.S. Capitol Officer Eugene Goodman is once again being praised for his heroic actions during the insurrection on Jan. 6.

During the second impeachment trial of Donald Trump on Wednesday, democrats released never-before-seen footage of Goodman leading Sen. Mitt Romney away from the violent rioters that had breached the building.

"You may have seen footage of Officer Goodman previously, but there's more to his heroic story," Plaskett said. A video of Goodman confronting rioters went viral after the attempted coup.

Plaskett went on to explain the video: "In this security footage, you can see Officer Goodman running to respond to the initial breach. Officer Goodman passes Sen. Mitt Romney and directs him to turn around in order to get to safety."

In the clip, Goodman races down a hallway in the Capitol as Romney is walking in the other direction. At Goodman's direction, Romney turns around and runs off.

Romney hadn't seen the security footage before Wednesday, and at the time didn't realize that it was Goodman who led him to safety, he told reporters as he left the Senate Chamber, TIME journalist Lissandra Villa reported.

Romney was one of only six Republicans to vote Tuesday that Trump's impeachment was constitutional even though he is no longer in office. Sens. Susan Collins, Bill Cassidy, Lisa Murkowski, Ben Sasse and Pat Toomey also voted that the trial was constitutional, NPR reported. The Senate vote ended up being 56-44.

Goodman played an integral role in protecting lawmakers from the violent riots that left five people dead on Jan. 6.

Just two weeks later, the officer escorted Vice President Kamala Harris and her husband, Doug Emhoff at the Inauguration on Jan. 20, and was subsequently named the new acting deputy House Sergeant at Arms, the chief law enforcement and protocol officer of the House of Representatives. The position makes Goodman the No. 2 security official at the U.S. Capitol.

A bipartisan group of lawmakers introduced legislation on Jan. 13 to award Goodman with the Congressional Gold Medal for the action he took during the riot.

"By putting his own life on the line and successfully, single-handedly leading insurrectionists away from the floor of the Senate Chamber, Officer Eugene Goodman performed his duty to protect Congress with distinction, and by his actions, Officer Goodman left an indelible mark on American history," the lawmakers wrote in the bill.

Goodman has not publicly addressed his heroic actions, instead asking for privacy. 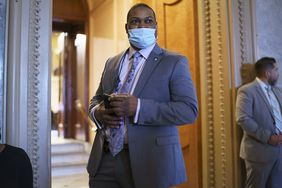 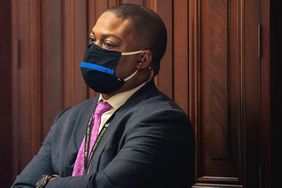 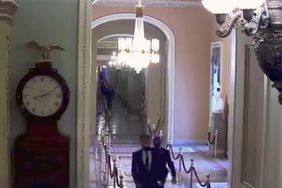