Senate Majority leader Mitch McConnell is attempting to capitalize on an out-there attack that a fellow Republican made against him last year.

On Thursday, the official Twitter account of McConnell’s re-election campaign tweeted out a photo of their new “Cocaine Mitch” T-shirts, which feature a faceless illustration of the Kentucky politician on the front alongside the image of a fine white powdery substance. Meanwhile, the back of the shirt reads: “Team Mitch Cartel Member.”

“A year ago, a legend was born. Own your piece of history. #CocaineMitch,” the Tweet read, while a follow-up message proclaimed, “Become an official member of the Cartel!”

The shirts are a direct reference to a claim made against McConnell, 77, by Don Blankenship, the former CEO of Massey Energy Company who was sentenced to one year in prison in 2016 following a coal mine disaster that killed 29 men, when he ran for a West Virginia Senate seat in 2018.

During one of his campaign ads for the Republican primary, Blankenship derisively called McConnell “Cocaine Mitch,” referring to a 2014 article that alleged drugs were found aboard a cargo ship owned by his wife Elaine Chao’s family, according to the Associated Press.

Chao currently serves as Transportation Secretary under President Donald Trump, who urged voters at the time to vote against Blankenship, who ended up losing the primary election.

The Washington Post went on to publish a lengthy article fact-checking the ad, reporting that many of the claims made within the video were false.

Following Blankenship’s loss in May 2018, McConnell’s campaign responded on Twitter by sharing a smiling photo of McConnell photoshopped onto an ad for the Netflix series Narcos, which chronicles the story of Colombian cocaine cartels.

The shirts, which are available to purchase for anywhere between $35 to $2,800 (which is the maximum amount donors are legally allowed to donate to election campaigns), have been purchased by supporters in 49 out of the U.S.’s 50 states, according to McConnell’s campaign.

“Can you wake up your friends in Hawaii and have them buy this #CocaineMitch shirt? Hitting all 50 states is our last Infinity Stone,” they tweeted, sharing just one hour later that they had achieved their goal.

Campaign spokesman Josh Holmes went on to tell the Associated Press they had already gotten over 1,000 orders — and had decided to sell bumper stickers as well.

“Senator McConnell proves every election cycle that having a sense of humor is the most valuable and least abundant commodity in politics,” Holmes told the outlet. “He managed to turn a slanderous attack on his family into an online movement of his supporters.”

Meanwhile, others are condemning McConnell’s shirts.

McConnell’s campaign responded on Twitter, writing, “If we sell enough #CocaineMitch shirts, we’ll buy you a sense of humor.”

In addition, anti-drug activist Tanya Meeks, who is from Lexington, Kentucky, criticized McConnell, tweeting: “The shirts aren’t just offensive, they’re a painful and cruel joke to those of us grieving a terrible loss or fighting desperately to save a loved one.” (Meeks’ 19-year-old son died from a heroin overdose in 2014.)

Kentucky had the third-highest age-adjusted rates of death by drug overdose in 2017, according to the National Center for Health Statistics. Also that year, the state had a total of 1,566 drug overdoses and Kentucky’s Office of Drug Control Policy reported that at least 51 of those deaths were due to cocaine. 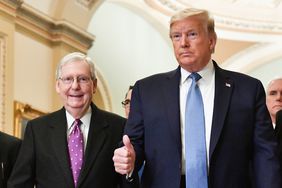