McConnell, an ally of President Donald Trump’s who has nonetheless been critical of him at times, reportedly urged caution before trying to rush out the release of potentially sensitive material.

“It’s not unreasonable to give the special counsel and the Justice Department just a little time to complete their review in a professional and responsible manner,” McConnell said on the Senate floor, according to CNN.

“We’re likely dealing here with potential other prosecutions, classified information, damaging people’s reputation,” McConnell continued. There’s no evidence that the attorney general is not going to produce as much information as possible for all of us, and that’s why I objected. I think it’s a reasonable thing to do.”

Senate Minority Leader Chuck Schumer, in turn, said McConnell’s hesitancy was in contrast to his own party and even the president.

Schumer’s resolution, which he moved to pass without a roll call vote on Monday night, per NBC, had already unanimously passed the House.

According to NBC, the nonbinding resolution, if approved, would not force the report’s release — only express Congress’ position on the matter.

“This language was good enough for every Republican in the Senate as well as every Democrat,” Schumer said in the Senate, according to CNN. “The president himself says it should be released. It’s hard to understand why the majority leader should stand alone with objections no one else found to be reasonable or sustainable and oppose this resolution. The report should be made public and the Senate should resolve that it should be.”

Mueller, who has been investigating any possible coordination and links between Trump and Russian officials (and related matters) since May 2017, concluded his investigation last week.

According to a brief summary of his findings released by Attorney General William Barr, Mueller did not find evidence of conspiracy or coordination between the president and Russia.

On the question of whether Trump obstructed justice into his investigation, however, Mueller did not make a determination — expressly noting that “while this report does not conclude that the president committed a crime, it also does not exonerate him.”

Barr has said he will work with Mueller and other officials in determining what parts of the report cannot be released, including information connected to underlying grand jury proceedings, but said that he will be releasing additional information.

Democratic lawmakers have called for the release’s full report.

Asked Monday how he felt about the possible release, Trump told reporters: “It’s up to the attorney general, but it wouldn’t bother me at all.” 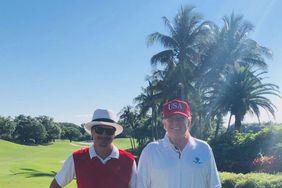