Former First Lady Michelle Obama shared a lovely tribute to her mother, Marian Shields Robinson, in honor of the holiday on Sunday

Michelle Obama is remembering the good times this Mother’s Day.

The former first lady shared a lovely tribute to her mother, Marian Shields Robinson, in honor of the holiday on Sunday.

“It’s impossible for any picture to truly capture what my mother, Marian, has meant to me,” she captioned the snapshot, a throwback photo featuring Obama and her brother Craig as kids. “Happy #MothersDay to all of the moms out there, and especially to my own.”

Robinson has been vocal about her admiration for her daughter, complimenting Obama’s “grace” as a first lady.

“I never doubted that she could do this. She is doing it with such grace and dignity,” the Chicago native said in an interview with Essence back in 2009. “So I am just proud. I just hope she does what she wants to do.”

In that interview, Obama also opened up about her mother’s role in her upbringing.

“She completely underestimates her role in who I am. She always says, ‘You came here that way, I just stayed out of your way.’ That’s not how I saw it. My mom is an incredibly intelligent and insightful person about life in general,” Obama said.

“From the time we could talk, she talked to us endlessly about any and everything with a level of openness and fearlessness that made us believe that we were bright enough to engage with an adult, that we were worthy enough to ask questions and to get really serious answers — and she did it with a level of humor.”

“Happy Mother’s Day to Michelle Obama and every mom everywhere,” he wrote.

During a question-and-answer session with author Roxane Gay at the marketing conference Inbound in September, Obama talked about how her children dealt with growing up in the public eye.

The former first lady pointed out that her daughters — who were just 10 and 7 when their father, Barack Obama, took office — didn’t ask to be famous and sometimes have trouble coping with all of the attention they receive from fans, critics and the media.

Michelle said she tries to model reacting with generosity, but she acknowledged that it’s particularly difficult for Malia — who had just started her freshman year at Harvard — to deal with 20 to 30 people each day coming up to her and saying, “Do I know you?” or “Can I get a picture with you?”

Obama shared behind-the-scenes details about how daughters Malia and Sasha said goodbye to the home they grew up in at the annual American Institute of Architecture conference.

“They had a sleepover, because of course on Inauguration Day, because my girls are so normal, they’re like, ‘Well, eight girls are gonna be sleeping here because it’s our last time, and we want pizza and we want nuggets.’ And it’s like, really?” she explained. 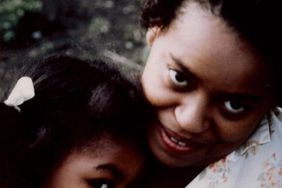 Michelle Obama Shares Moving Tribute to Her Mom on Her Birthday: 'You Are My Rock'