The Obamas are celebrating 25 years of marriage

On their milestone silver anniversary, Michelle Obama took to Instagram to share a throwback photo of herself and “best friend” Barack Obama from their Chicago wedding on Oct. 3, 1992.

“Happy 25th anniversary @barackobama,” she wrote alongside the shot. “A quarter of a century later, you’re still my best friend & the most extraordinary man I know. I (heart) you.”

Not only does this year mark the couple’s 25th anniversary, it also is the first anniversary they’re celebrating post-presidency.

Since leaving the White House, the Obamas have been hopping around the globe —from Indonesia to Italy — as well as tearfully dropping daughter Malia Obama off at college. The former president has also been hanging with some of the couple’s more famous pals, like Prince Harry, Joe and Jill Biden, Bill Clinton and George W. Bush.

And Barack Obama made quite the grand romantic gesture to wish his wife a happy anniversary himself: He surprised her with a sweet video message on stage during her talk at the Pennsylvania Conference for Women in Philadelphia. 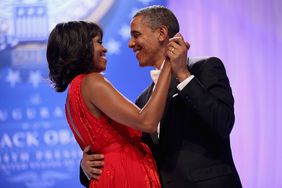 See Barack Obama Crash His Wife's Conference with Gushy Anniversary Tribute That Made Her Gasp, 'I Better Get Home!'