Melania Trump was able to put politics aside at Barbara Bush’s funeral, as she happily posed alongside politicians who have spoken out against her husband Donald Trump — and vice versa.

Following Saturday’s service, the first lady was seen smiling as she posed for a photo with the former presidents and former first ladies who had come to pay their respects to Mrs. Bush in Houston — including Hillary Clinton, who has had a contentious relationship with President Trump since running against him in the 2016 election.

Before the funeral began, the first lady — who attended the service without her husband — was spotted smiling and sharing a laugh with former President Obama, which quickly prompted social media users to joke about how much fun she seemed to be having away from President Trump.

Expressing her condolences following the service, the first lady went on to offer her “sincerest thoughts and prayers” to the entire Bush family.

“Today the world paid tribute to a woman of indisputable character and grace. It was my honor to travel to Houston to give my respects to Barbara Bush and the remarkable life she led as a mother, wife, and fearless First Lady. My sincerest thoughts and prayers continue to be with George H.W., and the entire Bush family,” she said in a statement.

According to a statement released by the White House and obtained by the Associated Press, the 71-year-old had decided not to attend in order “to avoid disruptions due to added security, and out of respect for the Bush family and friends attending the service.”

The first lady was instead accompanied by two private resident staffers who had worked under Mrs. Bush during her time in the White House.

“She knew they were very close to the Bush family and wanted them to be able to pay their respects,” White House spokesperson Stephanie Grisham previously told PEOPLE. 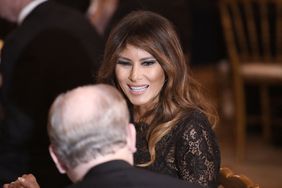 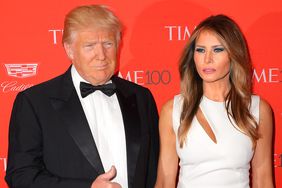 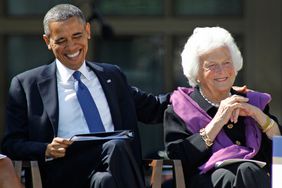 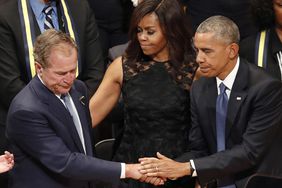 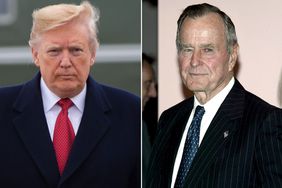