Kerstin Emhoff Opens Up About Doug, Kamala and Why She's Not Just 'the Famous Ex-Wife'

"I am accomplished in my own right," says the producer with a slew of credits, including Beyoncé's "Formation" music video

While Kerstin Emhoff has been catapulted into the political spotlight due to her friendship with Vice President Kamala Harris and Second Gentleman Doug Emhoff, her ex-husband, the California-based producer wants to be clear that she has a life and career all her own.

"I went from building a company from scratch and just trying to get attention to my company, my partners, my directors, the work that we're doing non-stop to you Google me and it's like crazy websites of '5 things you don't know about Doug Emhoff's ex-wife' or 'Kamala Harris's Husband's ex-wife,' " Kerstin told Politico, laughing, in an interview published Monday.

"I don't want to just be the famous ex-wife," she said. "I am accomplished in my own right."

As CEO of production company Prettybird, Kerstin, 54, has a slew of credits under her belt, including Beyoncé's 2016 "Formation" music video, a potential documentary about Georgia flipping blue in the last election and an in-the-works project for Apple, according to Politico.

But it's her personal life - particularly her blended family and warm relationship with the vice president and second gentleman - that has caught much of the public's attention.

Kerstin and the two children she shares with Doug, son Cole and daughter Ella, were on hand to support Harris at January's inauguration while Kerstin shared a handful of photos on Instagram that showed the three heading to various events, including the swearing-in.

Kerstin and Doug, a 56-year-old entertainment attorney, were married for 16 years before their divorce. ("I would have never thought that I would have married a lawyer," she told Politico. "I was a film student and I grew up in a performing arts school, but you know I like really smart people, and he's incredibly smart and we connected very quickly.")

Harris, 56, married Doug in August 2014 after they were introduced by a mutual friend.

In an interview with PEOPLE shortly after she was announced as Joe Biden's running mate, Harris spoke of her bond with her stepchildren, who call her "Momala."

"We're a very modern family," she said. "Their mom is a close friend of mine."

In an essay for Elle last year, Harris wrote that she and Kerstin "hit it off ourselves and are dear friends."

"She and I became a duo of cheerleaders in the bleachers at Ella's swim meets and basketball games, often to Ella's embarrassment," Harris wrote. "We sometimes joke that our modern family is almost a little too functional."

As Kerstin told Marie Claire for a 2020 profile of Doug, she was happy to hear that, following their divorce, he was dating Harris, who was the attorney general of California at the time.

As Kerstin now tells Politico, the trio even used to take spin classes together.

"When she was [California attorney general] and senator, I'd meet them at the SoulCycle by their house, and we'd take a class together," Kerstin said, adding that there was "just no chance of doing that now" in Washington, D.C., though they have "talked about that."

"I think it would torture Secret Service," she said.

As for her family's possible future Hollywood treatment, Kerstin told Politico that she already knows who should play her ex-husband: Jerry Seinfeld.

"He's got that schtick," she said, "and Doug is super charismatic so he needs someone with a very good, charismatic personality." 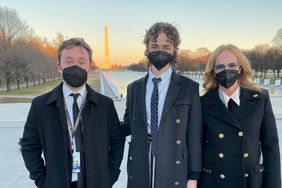 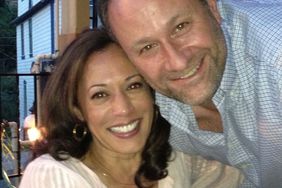 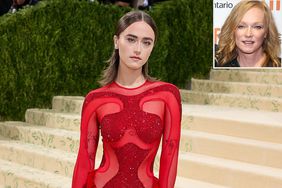 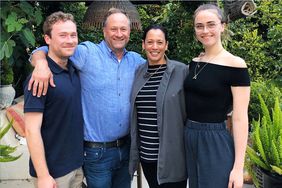 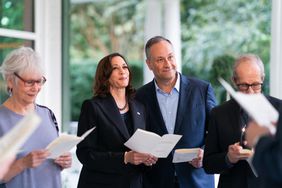 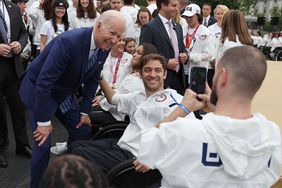 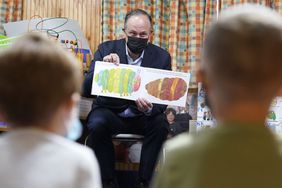