"There are progressive women out there. So my very strong tendency is to move in that direction," Sanders said

Former Vice President Joe Biden said at Sunday’s Democratic primary debate that, if he wins the party’s presidential nomination, he would pick a woman as his running mate to challenge President Donald Trump in the November election.

“There are a number of women who are qualified to be president tomorrow,” Biden, 77, said. “I would pick a woman to be vice president.”

Vermont Sen. Bernie Sanders, the other major candidate remaining in the Democratic primary race, was less definitive but said it was a very strong possibility that his running mate, should he be the nominee, would also be a woman.

“For me, it’s not just nominating a woman — it is making sure that we have a progressive woman, and there are progressive women out there. So my very strong tendency is to move in that direction,” said Sanders, 78.

Since the race for the nomination functionally narrowed to both Biden and Sanders in recent weeks, it has widely been presumed that whichever one wins would choose a woman as his running mate in a reflection of the diversity of the Democratic Party’s electorate, which largely draws on the support of women and people of color.

The field for the 2020 Democratic presidential nomination was, at one time, historically large and diverse. But it has been shrinking for months. Massachusetts Sen. Elizabeth Warren‘s exit on March 5 left the race without a major candidate who was not a white man in his 70s. (Hawaii Rep. Tulsi Gabbard is the third remaining candidate but has not won a primary or caucus and hasn’t qualified for a primary debate in months.)

Biden took the front-runner status in the primary election from Sanders earlier this month after a string of decisive victories sent his campaign into a dramatic turnaround, beginning with his double-digit victory in South Carolina. Those wins eroded the momentum Sanders built with earlier first-place finishes in Nevada and New Hampshire.

How the Coronavirus Outbreak Is Changing the 2020 Presidential Race

The two men have decades of shared Senate experience and a collegial relationship, but they have each cast the 2020 primary as a choice between diametric views of what a successful Democrat looks like.

With Democratic voters consistently saying their most pressing concern is defeating President Trump, Biden has touted his work as Barack Obama‘s vice president — a return to and expansion of that record in many ways — while Sanders has said this moment in American life has problems too urgent for anything less than political “revolution” and sweeping reforms in health care, education and more.

Sunday’s debate stood out from the dozen-plus others so far this campaign cycle for another reason: there was no live audience.

Instead, Biden and Sanders debated in a CNN studio in Washington, D.C., instead of the original location in Phoenix, Arizona.

The move was made amid escalating strategies at all levels of government and in society to address the coronavirus pandemic that began in China in December and has infected more than 160,000 people and killed more than 6,300.

There were about 3,480 confirmed coronavirus cases in the U.S. as of Sunday night.

The CDC and other officials have also strongly encouraged “social distancing” such as working from home and avoiding large public gatherings.

Governments across the country have taken this further in recent days: closing schools and restricting restaurants to delivery or take-out service and ordering mass gatherings canceled for the time being, among other measures. 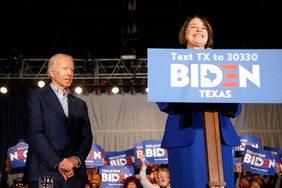