Ahead of the verdict in the murder trial of former police officer Derek Chauvin in the killing of George Floyd, Floyd's younger brother said that Joe Biden reached out to the family on Monday.

Speaking to Today on Tuesday, Philonise Floyd said that the president called his family to share in their loss.

"He was just calling," Philonise, 39, said in a remote interview. "He knows how it is to lose a family member, and he knows the process of what we're going through. So he was just letting us know that he was praying for us and hoping that everything will come out to be okay."

Speaking with reporters in the Oval Office on Tuesday, the president said he had "come to know George's family" and waited to call them until the jury in Chauvin's trial was sequestered.

"They're a good family," Biden said, describing them as facing both "pressure and anxiety." "And they're calling for peace and tranquility."

"I'm praying the verdict is the right verdict. Which is— I think it's overwhelming in my view," Biden said, reversing what had been his silence on the outcome while the trial proceeded.

His candor was also unusual given that presidents typically avoid commenting on ongoing law enforcement matters. "We're not going to get ahead of those [jury] deliberations," White House spokeswoman Jen Psaki said on Monday.

As Philonise referenced on Today, Biden has seen his own tragedies.

In 1972, his first wife Neilia and their 13-month-old daughter, Naomi, were killed in a car crash that injured his two young sons as well. (When he first took his oath for the Senate on Jan. 5, 1973, he did so in front of a then 3-year-old Beau Biden's hospital bed, as his young son recovered from his injuries).

In 2015, Beau died from brain cancer at the age of 46 and his grieving father decided against a 2016 presidential campaign.

"Look, dealing with the loss of Beau, any parent listening who's lost a child, knows that you can't — it doesn't follow schedules of primaries and caucuses and contributors. Everybody grieves at a different pace," he said then.

In an exclusive interview with PEOPLE earlier this month, Floyd's sister LaTonya Floyd said watching the trial had exacerbated the family's grief.

Adding to the pain had been expert testimony that showed George's death took longer, and was more painful, than the family had realized.

"I wish he was here. Period. I wish this never happened to him. I don't wish this on anyone," LaTonya said. "But if he had to go — make it quick. If you want to kill him that bad, why make him suffer? He suffered. He felt every ounce of pain."

Chauvin, 44, has pleaded not guilty to charges of second-degree murder, third-degree murder and manslaughter in George's killing last May.

His defense argues he acted reasonably in his capacity as a police officer and that Floyd's health issues and drug use were also factors. Chauvin's attorney has unsuccessfully also argued that jurors are being tainted by the international attention on the case.

The Minneapolis police chief testified at the trial that Chauvin did not act appropriately: "Once Mr. Floyd had stopped resisting, and certainly once he was in distress and trying to verbalize that, that should have stopped."

The infamous arrest — partially captured on video that is now at the heart of Chauvin's trial — unfolded after officers responded last year in Minneapolis to a "forgery in progress" over a suspicious $20 bill that George used to purchase cigarettes.

Once George was handcuffed, Chauvin arrived at the scene, ultimately pushing him to the ground and kneeling on his neck for approximately nine minutes. Transcripts of police video show that Georgie said he could not breathe more than 20 times while being restrained.

Witnesses to the arrest testified about their rejected efforts to stop or intervene in Chauvin's actions. The video they captured went viral and fueled outrage and protests worldwide against police brutality and racial injustice.

In a statement during the 2020 protests, Biden said that "protesting such brutality is right and necessary," but added that "needless destruction" is not.

In her interview with PEOPLE during Chauvin's trial, LaTonya said that she was grateful for the witnesses who have testified during her brother's trial, adding that she didn't feel more could have been done by them to save his life. 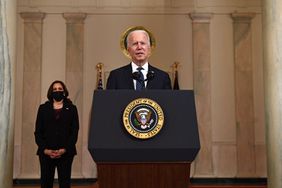 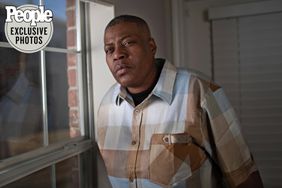 George Floyd's Sister Says Trial Reminds Her of Suffering He Endured: 'He Felt Every Ounce of Pain'