Carter, 94, is set to head to Nashville, Tennessee, in October with wife Rosalynn Carter to volunteer at his 36th Carter Work Project, just months after undergoing surgery following a fall at his home.

The oldest living president will team up with future Habitat homeowners and other volunteers to build 21 new homes in the city’s Park Preserve neighborhood from Oct. 7 to Oct. 11, Habitat for Humanity spokesman Bryan Thomas confirms to PEOPLE.

He and Mrs. Carter, 92, have been building homes each year since 1984 in locations all over the world, including Miami, South Dakota and Houston, as well as countries like the Philippines, South Korea, India and Haiti.

According to Habitat, they’ve helped build, renovate and repair 4,331 homes in that time.

Nashville was announced as the 2019 location last year, with a statement at the time saying that the Tennessee city has lost over 20 percent of its affordable housing since 2000.

Inside Jimmy Carter’s Still-Active Lifestyle at 94

Carter’s decision to once again grab his helmet and hammer comes after he was hospitalized for several days in May after he fell at his home in Plains, Georgia, and had to undergo surgery on his broken hip.

The Nobel Peace Prize winner was heading out from his home to go turkey hunting when the incident occurred.

A spokeswoman said at the time that Carter would recuperate at home and receive physical therapy but had no plans to miss his regular Sunday school class at his local Maranatha Baptist Church. He resumed teaching in June.

“Both President and Mrs. Carter extend their thanks to the many people who sent well wishes the past few days,” their spokeswoman said.

Despite other health setbacks, such as brain and liver cancer in 2015, Carter has remained active and continues to travel, teach and volunteer. 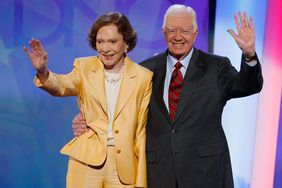 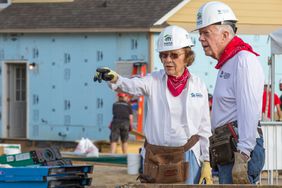 See Jimmy & Rosalynn Carter's Work with Habitat for Humanity Through the Years: Why They've 'Devoted' Decades to Service 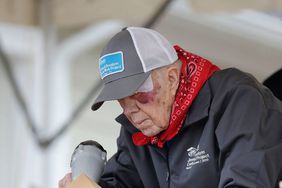