Ivanka Trump took this Mother’s Day as an opportunity to compliment her mother’s skills on the slopes — and not everyone was impressed with the first daughter’s words.

President Donald Trump‘s eldest daughter, 36, shared a tribute to Ivana Trump on her social media pages Sunday — but rather than a sweet photo of them together or a throwback snap, Ivanka used a glamour shot of her mom skiing.

“Happy Mother’s Day to my amazing mother and the best skier I know! Love you,” she captioned the post.

“@itsivanatrump that was a weak Mother’s Day wish. Ivana, you deserve better than that,” wrote one Instagram user.

“How nice… but I’m sure she has some pretty amazing attributes as a mother than just being the best skier,” explained another person. “You are who you are because of her. She deserves more honor. Happy Mothers Day all!”

Another commenter had harsher words, penning, “Wow, that’s it?! And she’s @itsivanatrump supposed to visit you in #prison?? #prisonprep101 #LockThemAllUp.”

“Your dad should’ve been a better husband to her,” wrote one Instagram user, referring to Ivana’s marriage to the future president from 1977 to 1992.

“Oh how relatable,” joked another person. “Sking in a half updo, diamonds and sequins. The Trump’s, they’re just like us 😅.”

Sympathy for Ivanka was also expressed in the comments, with one person writing, “She surely told her mother in private and skying could be their common activity, so it could mean a lot to both of them.”

Ivanka shared a heartfelt message to her mother in February in honor of her 69th birthday along with a throwback photo of the Czech former fashion model in a strapless white gown with her daughter bowing down to her in a similar get-up.

“Happy birthday Mom!” she wrote. “Today, I bow to you even deeper, as I better understand just how hard a job it is to be a great mom! You inspire now, as you did then. I love you.”

“She was the ultimate role model for me of a woman who works at her life and who works at balancing different priorities,” Ivanka told PEOPLE of her mom in July 2016. “And I think one of the things that was amazing about my mother is her role as a parent was complimentary to her role as an executive and vice versa, so I think she learned a lot of skills negotiating with us that she brought into the boardroom and vice versa.”

“She lived a very well-rounded life and it was always clear to us that we were her priority and that doesn’t mean that we got her 24 hours a day,” Ivanka continued. “She spent very meaningful time with us, but she was also working very hard professionally and was very ambitious and very successful — both when she worked with my father and when she created her own company and her own business thereafter.”

Ivanka discussed her close bond with her grandmother, Ivana’s mother Marie Zelnickova. “She lives with us half the year between my mother, and then my siblings and I fight over who gets to take Bubby for the weekends,” explained Ivanka.

“Happy Mother’s day to the best mom in the world,” he captioned a collage of photos of Vanessa with their five kids — Kai, 11, Donald III, 9, Tristan, 6, Spencer, 5, and Chloe, 3. “Vanessa enjoy your day, you’ve certainly earned it dealing with those 5 munchkins and me.”

A social source close to the Trumps previously told PEOPLE that the estranged couple is committed to putting on a good face as they continue to co-parent their children.

“Donald Jr. and Vanessa are not fond of each other, but will do what is necessary to protect the kids from any issues,” the insider said.

Meanwhile, President Trump shared a video message to Twitter in honor of the holiday.

“This is one of the most important days of the year,” he said. “I would like to thank all of the mothers and grandmothers in our lives. America’s strength has come from the love and courage and devotion of our mothers.” 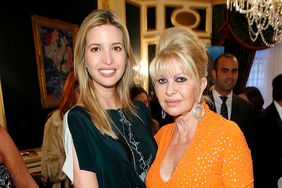