Ivanka Trump this week betrayed no hint that the White House where she works as a senior aide was preparing to fight the possible impeachment of President Donald Trump, her father.

As the House of Representatives was set to vote on the next phase of its impeachment investigation — and begin making public some of the damaging evidence that lawmakers have reportedly gathered behind closed doors — Ivanka, who turned 38 on Wednesday, promised that “the best is yet to come.”

A top adviser to the president and the face for his administration’s workforce and family policies, Ivanka celebrated her birthday with a glammed-down selfie on Instagram and the hashtag #38yearsyoung.

Younger sister Tiffany Trump sent well wishes, as did older brother Donald Trump Jr. and his girlfriend, Kimberly Guilfoyle. (President Trump, who regularly writes “happy birthday” to other people on Twitter, his preferred medium, didn’t tweet anything — though he has in years past.)

Since joining the White House in 2017, Ivanka has largely and conspicuously abstained from the battles and controversies that have consumed other administration figures. She and husband Jared Kushner, another top presidential aide, have weathered criticism about their qualifications, security clearances and true motives. They have remained in the White House amid historic turnover, becoming two of the most influential and most scrutinized aides.

Critics deride Ivanka as a hypocrite for at least tacitly permitting some of same policies with which she disagrees, such as separating migrant children from their parents, which she once called a “low point.”

With time, however, Ivanka has carved out a niche for herself, reliably trumpeted by the White House and her dad: that as a top female entrepreneur, wife and mother, she will lead policy efforts on work and family — providing rare bipartisan policy wins while the administration focuses on more divisive issues such as restricting immigration.

The president has repeatedly said, without evidence, that Ivanka “created millions of jobs.”

“The talent, grit and spirit of the American worker have always defined our nation and enabled us to compete and lead in the global economy,” Ivanka wrote in a Fox News op-ed in March 2018. “With the goal of growing the American economy through pro-business policies and job creation, the Trump administration’s robust plan aims to deliver education to Americans across the country that is better skills-focused and often debt-free.”

Not everything has gone smoothly: Even avoiding the inflammatory tactics of her father and brothers, Ivanka is regularly mocked — her every slip-up meme’d — during her public appearances (such as a September trip to South America).

Earlier this week, The Daily Beast published a lengthy look at how Ivanka and Kushner take pains to respond to and try to shape their news coverage.

According to journalist Vicky Ward, Ivanka called Esquire Editor-in-Chief Jay Fielden in 2016 to complain about Ward’s profile of Kushner and, crying, asked Fielden to take it down. (Ward, now a CNN senior reporter, confirmed this anecdote to PEOPLE; Fielden did not immediately return a call.)

But there was no such negativity on Ivanka’s social media this week, where instead she posted about her ongoing White House work.

Asked by Fox Business earlier this month about the impeachment investigation in the House, Ivanka brushed it off: “I think everything’s a question of priorities. We have our priorities in the White House. We’re fighting every day for the American worker.”

A White House spokeswoman for Ivanka declined to comment on the record for this article. 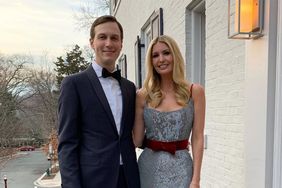 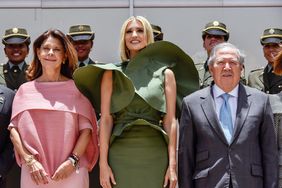