"He hates to be a loser, that I'm sure of," the president's first ex-wife says, "but if he loses, he loses"

For the record, President Donald Trump’s ex-wife Ivana Trump is sick of all of this too.

“I just want this whole thing to be over with, one way or the other,” Ivana, 71, tells PEOPLE. “I really don’t care.”

Trump, 74, has insisted that he won’t personally accept the results of the presidential election in which he was defeated by Joe Biden and he has said he will mount a series of legal challenges in the states where he lost, such as Nevada and Pennsylvania.

Without evidence, the president has argued the 2020 contest was “stolen” from him and that the votes for Biden were fraudulent, echoing claims he has made about other elections going back years.

“He’s not a good loser,” says Ivana, the president's first wife and mother of his three oldest children. “He doesn’t like to lose, so he’s going to fight and fight and fight.”

Other leading conservatives have made more vague statements about the importance of investigating any serious allegation of fraud.

Still, Trump and his allies say the election isn't over even as some around him acknowledge the challenge ahead.

"We just want the process to play out," says one former administration official turned Trump adviser. "The media don't get to call elections, the people do."

"The states have to certify [their results by December]," this source says.

Nonetheless, they tell PEOPLE, "I'll always think the president did not get the campaign he deserved. They raised $1 billion and lost to Joe Biden."

Another source close to the Trumps tells PEOPLE there’s “still chaos” within the immediate family and that they haven’t fully realized the election results because “nobody was expecting it.”

“It’s been a headache,” the source says.

Says a third source, who is close with son Eric Trump: "They’re very upset. It’s been hard to watch."

Ivana tells PEOPLE her three children with her ex-husband — Eric, Donald Jr. and Ivanka — are doing “fine” but that she can’t wait for them to move on from Washington, D.C.

“I think they enjoyed being around Donald and running the election and seeing what will happen, but now it is — thank god — over,” Ivana says. “I’m not really sure what they are going to be up to.”

(A source close to Ivanka and her husband, Jared Kushner, both of whom are senior White House aides, had only rosy projections to make: "Back of the envelope, the opportunities that are available to them — without getting too much in the weeds — it's obvious they can be in control of the Republican Party for decades or they can do international work or business.")

As for the president, his ex — with whom he has had a notoriously tempestuous relationship through the decades and who isn't shy about offering her opinion on him and the White House, praising his conservative achievements — guesses that he's likely to be done with politics despite his bluster.

“I don’t think he has a choice,” Ivana says. “He’s going to go down to Palm Beach and play golf and live the normal life, I think. This is the best choice for what he can do.”

But first, he would have to face reality.

“He has to go and declare that he lost. But he hates to be a loser, that I’m sure of,” Ivana says. “But if he loses, he loses. He has plenty of money, places to go and live in and enjoy his life.” 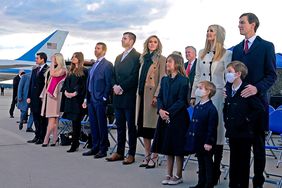