Donald Trump rang in the new year — and a new controversy — during a lavish party at his Mar-a-Lago resort in Palm Beach, Florida, Saturday night.

According to Page Six, the 800 guests at the sold-out $424-per-head event included wife Melania, Sylvester Stallone, model Fabio and the president-elect’s son Eric. The partygoers walked in on a red carpet and spent the night dancing and having a dinner that included “Mr. Trump’s Wedge Salad,” wild mushroom and Swiss chard ravioli, sliced tenderloin and pan-seared sea bass, CBS News reports.

The night before the bash, Dan Scavino Jr., Trump’s social media director, tweeted a photo of a framed gift he said was from Stallone. The 70-year-old action star allegedly wrote, “To President Trump, A real champ! GREATEST KNOCKOUT IN HISTORY!”

A tuxedoed Trump addressed his guests at the bash, and CNN obtained footage of the speech. The 70-year-old president-elect is seen praising Dubai business partner Hussain Sajwani, who is building a golf course designed by Tiger Woods that is slated to open in 2018.

“Hussain and the whole family, the most beautiful people, are here from Dubai tonight. And they’re seeing it and they’re loving it,” Trump said, referring to Mar-a-Lago’s Grand Ballroom, in the video.

Trump’s transition team said he and Sajwani did not discuss their business partnership during the bash, CNN reports.

“They had no formal meetings or professional discussions. Their interactions were social,” said Hope Hicks, Trump’s spokesperson. 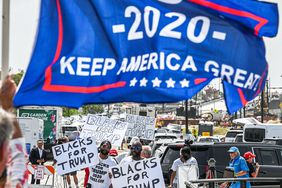