Literal storm clouds hung over Palm Beach, Florida, on Saturday where President Donald Trump spent the weekend away from the ongoing impeachment trial and the many Democrats preparing to challenge him in November.

At his Mar-a-Lago Club, however, the mood was conspicuously upbeat: a temporary break from historically serious allegations that he abused his office and betrayed the Constitution.

On Saturday night, for the third year in a row, the “Trumpettes” hosted their annual gala cheering on the president and his re-election campaign.

“The energy in that room was intense,” says Toni Holt Kramer, founder of the Trumpettes.

President Trump, First Lady Melania Trump, Florida Gov. Ron DeSantis and Florida’s first lady, Casey DeSantis, surprised the group with an appearance. There was cheering and actual cheerleaders, there was singing and music and there was “energy and love.”

There was almost certainly little talk about impeachment or Trump’s Ukraine scandal.

“Proud to Be an American” singer Lee Greenwood performed. Fox News host Sean Hannity, who taped a pre-Super Bowl interview with Trump, was also there among the 700 attendees, along with Trump’s son Donald Trump Jr. and Kimberly Guilfoyle, Don Jr.’s girlfriend. (Not present? Ivanka Trump, Jared Kushner and Eric and Lara Trump.)

Roseanne Barr had been scheduled to help headline but came down with the flu while at her ranch in Hawaii and was advised by doctors not to fly, she told the event organizers.

“We honored President Trump and the Super Bowl by putting a caricature of him in a football jersey that read ‘Trump 45’ standing on a football field with the White House in the background,” Kramer tells PEOPLE.

A former TV personality, Kramer created the Trumpettes, a collection of wealthy socialites, Mar-a-Lago members and others who supported Trump. She says the group is now focused on 2020.

At Saturday’s gala, Mrs. Trump, 49, told the crowd “she will definitely be on the campaign trail and is looking forward to it,” Kramer says. The president, she says, was “grinning from ear to ear.”

Trump, 73, had spent that day golfing — as he usually does while in Florida, despite criticizing his predecessor Barack Obama for golfing while in office — and also took time for phone calls and “meetings with staff,” according to the White House.

On Sunday, he attended his usual Super Bowl watch party at his Trump International Golf Club. He and Mrs. Trump also watched a performance by the Florida Atlantic University marching band.

Throughout the weekend, Trump was extremely active on Twitter: posting or retweeting dozens of messages.

He attacked his impeachment trial in the Senate after he was accused of abuse of power and obstruction of Congress. He attacked his Democratic rivals. He posted about his Super Bowl ad on criminal justice reform (which drew backlash) and then wrote and deleted a tweet incorrectly saying the Kansas City Chiefs were based in Kansas, not Missouri.

He and the first lady and their teenage son, Barron, returned to Washington, D.C., late Sunday.

He is scheduled to give the State of the Union to Congress on Tuesday night and, on Wednesday, Republicans in the Senate are expected to acquit him after blocking an effort to call new witnesses at his impeachment trial. 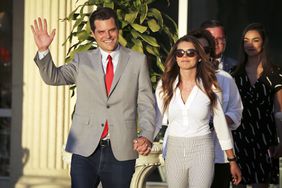 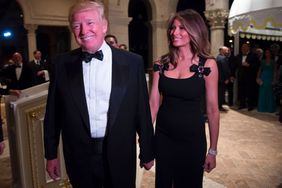